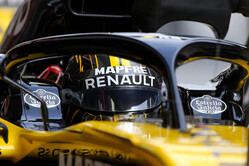 The German, who has started all three of this year's Grands Prix from the fourth row, sat out the final twenty minutes of today's practice session after reporting an issue with his car.

Ending the session 17th, one place behind his teammate, Hulkenberg and Sainz, were the only drivers who ran on supersofts as opposed to ultras.

Shortly after the end of FP3, which was disrupted following a late crash involving Sergey Sirotkin, Renault confirmed the need for the gearbox change along with the penalty, the German's current gearbox not having lasted the required six races.

Today's issues follow a difficult start to the Baku weekend for Hulkenberg who experienced brake issues in FP2 along with the team electing to change the plank under his car.