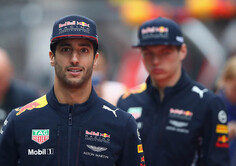 Daniel Ricciardo and Mex Verstappen have both been given reprimands following today's Azerbaijan Grand Prix.

The pair fought for much of the race, and at one point Verstappen appeared to try and force his teammate wide, actually hitting Ricciardo's car.

However, it was the incident on lap 39 which saw them hauled before the stewards.

Having spoken to both drivers and viewed the relevant video footage, the stewards deemed that both drivers contributed to the collision.

Verstappen made two moves, both of which were relatively minor, while Ricciardo admitted he left his move to overtake on the left, too late, said the stewards.

According to the stewards, it was obvious that although the incident had its origins in the moves by Verstappen, Ricciardo also contributed to the incident.

Both drivers expressed regret about their respective contributions to the incident, during the hearing and were subsequently each given a reprimand, their first of the season.

Meanwhile, team boss Christian Horner has ordered the pair to apologise personally to the team's workforce at its Milton Keynes HQ this week.

"I have watched a few replays and the only thing we can both say is sorry to the team," said Ricciardo of the incident. "This is the last thing we wanted. We want to be able to race and I'm thankful that the team let us race.

"We tried to keep it clean and give each other room but we were racing hard and in the end it cost us. I'm not going to talk about the incident but this was the worst case scenario and everyone is pretty heartbroken.

"I will personally apologise to the team and once again I'm just sorry we are all in this situation when everyone has worked so hard to give us such a good car."

"I don't think we need to speak about fault," added Verstappen, "because at the end of the day we are racing for a team and representing a lot of people, so when this happens it is not good for both of us.

"The tow was very strong and our speed was very similar, so we were then always very close to each other. Before the accident it was hard racing but fair I think and we gave each other space, we had a little brush with the wheels but I think in racing that can happen, but what happened afterwards is not good.

"We will learn from this and have to make sure it doesn't happen again. I don't think not letting us race anymore is the way forward but of course we will talk this over as a team and learn from it. We are always very fair to each other and have spoken immediately about this. For now, I'm just sorry and want to apologise to the people we represent here and at the factory as well."