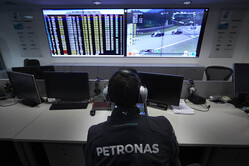 In addition to the army of engineers staring at their various monitors on the pit-wall, garages and numerous paddock facilities, the teams have an equally impressive army of technicians working away back at their factory headquarters. Indeed, many significant decisions are made in real time many thousands of miles away from the race track.

However, as the sport seeks to impose a budget cap, while also placing more emphasis on the driver rather than the boffins, the future of the factory-based control centre is under threat.

"I think it's a very bad idea because we've invested in the virtual garages," Toto Wolff told reporters in Baku.

Other than allowing the teams access to countless boffins who would never be granted track access due to the limitations of staff numbers, the excitement generated by the 'virtual garage' had led to new revenue streams for the teams.

"Actually, there's not only engineers in our virtual garage back at Brackley," admits Wolff. "We have sponsors there, we are trying to have co-operations with high-tech companies and this is the part they are most interested in.

"As far as I know, many teams have managed to commercialise the race support structures back in the factories and of course it gives you an advantage if you've got more brains working on solutions and problems. For us it has become a point of sale."