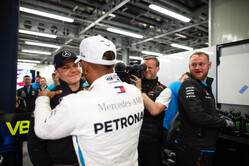 While Lewis Hamilton's win and Valtteri Bottas' late puncture - along with the various antics of Messrs Verstappen, Ricciardo and Grosjean grabbed the headlines, the fact remains that while the reigning world champion took the lead in this year's title fight, Ferrari leapfrogged Mercedes in the Constructors' Championship.

Indeed, having set the pace for much of the weekend, it was a combination of various factors, including that mistake by Kimi Raikkonen late in Q3, and none suggesting that Mercedes still has the upper hand, that prevented the Maranello outfit from walking away with a more convincing lead in both championships.

As Toto Wolff appreciates, and while admitting the obvious threat from the Prancing Horse, the Mercedes boss fully empathises with his Finnish driver.

"I think the feeling that prevails all of us is that we didn't have the pace through the weekend that we need to have," admits the Austrian.

"From his perspective he very much knows what's right and wrong," he continued, referring to Hamilton's surprise win. "It was Valtteri's race to win. But then I think he just got his Melbourne victory back from his perspective.

"This is how you must see it. It doesn't take away the emotion and brutality on Valtteri which gives us a bittersweet feeling about the result and equally the lack of pace we had.

"Luck is part of the sport and the Safety Car went against us in the past and Sunday it gave us a win. It still doesn't feel right for two reasons.

"The first reason is that we lacked the pace and the second reason is that the quickest guy on track didn't finish with a puncture that was caused by debris on track three laps to the end."

Prior to the over-ambitious move by Sebastian Vettel which was to cost him a podium place, he had previously lost out due to Bottas' decision to stay out on supersofts.

"I think the topic of this season is tyre warm-up because the Ferraris were in the window, Sebastian's first lap was two and a half seconds quicker than anybody else," admits Wolff. "We were doing fine, and the tyre was coming in, but the Red Bulls struggled a lot. Once the temperatures stabilised our pace was OK, but I still think that Sebastian managed at the front. In those early stages he was the fastest car on track but that changed because Valtteri's race came towards him.

"We knew that staying out would give him the opportunity if there was a Safety Car and this is what we did. It is just very brutal for him to lose what looked to be an easy win three laps to go with some piece of debris on the track."