Hamilton stopped off to comfort Bottas 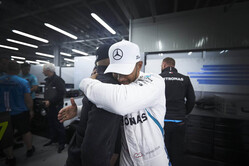 The post-race interviews were every bit as chaotic as the race yesterday, with MC David Coulthard interviewing third-placed Sergio Perez before winner Lewis Hamilton and finally Kimi Raikkonen.

While The Iceman's excuse was that he was canoodling with his wife. Lewis Hamilton had stopped off at his garage to commiserate with teammate Valtteri Bottas who had looked set for victory until suffering a dramatic puncture just three laps from the end.

Walking up to his Finnish teammate, Hamilton hugged him, the emotion still present as he spoke to MC DC.

"Really quite an emotional race to be honest," he told the Scot. "Valtteri did such an exceptional job today and really deserved to have the win. Also, Sebastian did a great job.

"I think it was really, really fortunate today, so it feels a little bit odd to be up here," he admitted, "but I've got to take it. I didn't give up, I keep pushing but definitely a very untidy race from me."

At the subsequent Mercedes media debrief, he added: "I have very mixed emotions. It's really quite a humbling experience. Ultimately, Valtteri deserved to win. He did an exceptional job, a faultless drive. Less so on my side.

"Straight away when I got out of the car and did the interviews I went to see Valtteri," he revealed. "I just wanted to congratulate him on how well he drove and that's why I was late to the podium.

"Valtteri was very, very unfortunate. A one-two would have been a great result for today. I wouldn't have got by him if he hadn't had that tyre blowout."