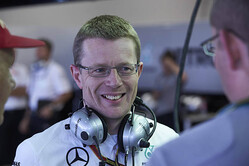 It is hoped that the new engine formula for 2021 - when it is agreed - will encourage new manufacturers to enter the sport, further standardisation of parts and the removal of the costly and somewhat volatile MGU-H being key to this.

Mercedes engine boss Andy Cowell, admits that in its eagerness to see new manufacturers enter F1, the German manufacturer would be willing to offer assistance to newcomers.

"I guess one of the things we all wish is that there were ten manufacturers in the sport, ten teams, ten power unit manufacturers," said the Briton.

"There is a desire from us and from the FIA and Formula 1, and removing the MGU-H does that help a new entrant come in - quite possibly.

"We've offered to help with technology transfer to help a new entrant," he continued. "The best way to make it easier for a new entrant is to take some of the systems away, the ones that are perceived to be complex.

"How far would we go? We'd go as far as was required to help the newcomer and I guess that support would then taper out. We really would like more manufacturers to be in to make the sport healthier."

Asked if Ferrari would be as willing, technical boss Mattia Binotto admitted: "I think it would be good for the sport, new manufacturers.

"I think we would help them certainly, through the regulations, as we said, in order to reduce some complexity or not to frighten newcomers as to what is the complexity of our technology at the moment. So we would support it, certainly through regulations. I think that's the best we can do."

"I think we would have to define the frame of that (help), said Renault's Remi Taffin, "but obviously we are discussing that.

"We will be looking at this and we will see where we get but we really appreciate to have top competition.

"We at Renault are already helping teams because we have customer teams so we supply power units. Whether it comes to a part or a fraction of that power unit is a different matter and it's being discussed."