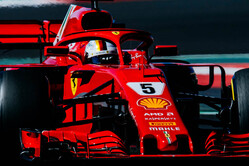 Already concerned that the thinner treaded tyres Pirelli introduced in Spain were a bid by Pirelli to aid Mercedes, in particular, and also Red Bull, as the two continued to struggle with over-heating, both having suffered in pre-season testing, the poor pace of the Ferrari compared to its rivals did little to dispel the suspicion.

However, back-to-back testing of the different treaded tyres yesterday, convinced Sebastian Vettel that his team's issues on Sunday did not lie with the tyres.

"It's pretty straightforward," said the German. "Obviously you don't get the chance to revisit these kind of decisions that are made, but we did it today and the result is that if we had had the normal tyres on Sunday, it would have probably been worse, so it was the correct call.

"It was our fault for not having the same tyre wear or life as other people," he added."

Confirming that his team used the day to try to solve the issues, bearing in mind that the same thinner treaded tyres will be used at Paul Ricard and Silverstone, the German hoped that the day's work was worthwhile.

"It's good to have the test to be able to compare and I think we have some ideas. Now it's up to us to turn those ideas into reality.

"As I said it was good in terms of timing, coming from a poor weekend for us, we were not quick enough and more than not being quick enough we were struggling to make the tyres last, these things have a link, so it was good to have a possibility to revisit it and now it's up to us to take action.

"Obviously it looked like from the outside they had a stronger weekend, without any big issues," he said of Mercedes which scored an emphatic 1-2, "but we need to look at ourselves, focus on our car and our problems, so we'll be stronger again."

"One, we were not quick enough. If we are not able to see that then we are more than blind," he said. "Second, I think we struggled a little bit over the course of the weekend with the tyres. They changed, but they changed for everyone. Third, I think it was a poor weekend in terms of reliability. Kimi had an issue with the engine yesterday and had to change the engine, and then obviously retired in the race."

Check out our Tuesday test gallery from Barcelona, here.