Wolff: I understand why they did it 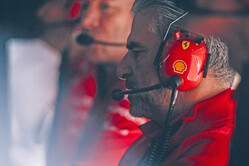 Following the introduction of the VSC in the wake of Esteban Ocon stopping his Force India on track with an oil pressure issue, just three drivers pitted.

One was teammate Sergio Perez, who currently running in tenth, the other two were Sergey Sirotkin, who was running last, and second placed Sebastian Vettel.

Following his stop the German emerged in fourth, behind Max Verstappen, who had made his sole stop of the race just seven laps earlier. Unable to make a mark on the Red Bull driver, Vettel finished in the same position, while race winner Lewis Hamilton extended his title lead to 17 points.

While the move has led to many questioning Ferrari's strategy (again), Toto Wolff understands the reasoning behind the move.

It's always a very difficult call to make," he told reporters. "We had it in the past - Shanghai was trading track position versus fresh tyres - and we debated it today again, and based on the experience we made of struggling to overtake Max, for us it was clear that track position was more important.

"Ferrari did the opposite," he continued, "you saw that it worked out for Ricciardo and Verstappen in Shanghai, I think this is what they were thinking.

"It's always very difficult calls to make. I fully understand why they did it."