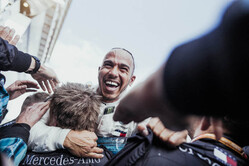 There was no mistaking the unbridled joy that followed Lewis Hamilton's win in Barcelona.

For other than the fact the victory was not inherited at the expense of others, he led an emphatic Mercedes 1-2 that loudly proclaimed "we're back!"

While the 25 points won in Azerbaijan had given him the championship lead, Barcelona's light-to-flag cruise extended it to 17 points and served notice that despite the German team's wobbly start to the season and the obvious improvements from its rivals, neither Mercedes or the Briton is ready to relinquish its titles just yet.

"I think today has been a rejuvenating experience," Hamilton told reporters. "People probably think it was an easy race and I was cruising but I wasn't cruising.

"It is the greatest feeling to come here and have that kind of performance and then win convincingly," he continued. "That is what anybody with a win wants to do, to do it that way.

"It is definitely a great, great feeling and I think you could probably see form my energy when I got out the car. I don't know how I managed to fit in the training in between all the other things that I do but I was pretty fresh after the race. That is another positive but I think not every win feels as great as that one does.

"To think that is my 64th, it still feels like a first, special and unique in its own way," he added. "The journey to it is why it feels unique on its own but that is encouraging for me because I've been racing a long time so to still have that feeling when I have that win. That happiness and that uplift from inside that I have that feeling.

"I am going to sleep like a baby tonight because I know I did my job this weekend to the maximum and I didn't leave anything on the table so there is no better feeling."