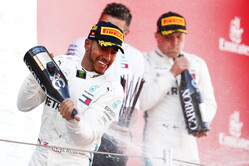 Most drivers went for a one-stop soft-medium strategy in Spain, including the top three, but two and even three stops were also seen during the 66-lap race.

Conditions were variable, with sunshine, a few drops of rain and wind making the track hard to predict, with changeable grip levels. The race ended with temperatures that were 17 degrees ambient and 26 degrees on track.

The new surface has made the track considerably quicker, with the frontrunners lapping up to four seconds faster than they did last year. The race lap record was also broken by a similar margin; making this the fastest-ever race on the current Barcelona circuit.

Nearly all the drivers started on the soft tyre, with an early safety car from lap one helping to reduce wear and degradation rates.

Mario Isola: "We saw different thinking from the top teams about whether or not this was a one or a two stop race, with the track conditions having been extremely hard to predict from the beginning of the weekend, not helped by the overnight rain. The laps under the safety car also affected race strategy, reducing wear and degradation at a crucial point in the race. Tyre-wise, we encountered no issues at all and no signs of blistering, with lap records and fastest laps set even when drivers were running on older medium compound tyres. This applied to the whole field, which was very evenly matched in terms of pace. Now we remain in Barcelona for the first in-season test of the year, which will include development testing of the 2019 tyres, with McLaren and Force India."