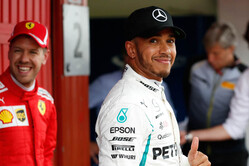 Ahead of today's all-important qualifying session the air temperature is 18 degrees C, while the track temperature is 27 degrees. Noticeably cooler than yesterday's second session and this morning. The wind has picked up since earlier and there is also a chance of rain, certainly going by the clouds in the distance.

We say "all important" because only three of the 27 Grands Prix run to date at this circuit has seen a win scored from beyond the front row of the grid. The most recent example being Max Verstappen's maiden win after starting the 2016 race from fourth, while Fernando Alonso is the current record holder having scored his 2013 from fifth place on the grid.

Having topped the timesheets in all three practice sessions Mercedes heads into this session with understandable confidence, the cooler conditions clearly suiting the W09.

Though Lewis Hamilton expressed fears that Ferrari had been sandbagging on Friday, this does not appear to be the case. However, once the engine modes come into play who knows how that might develop.

Though Red Bull has clearly taken a step forward here, the weekend has not been without its problems, with neither drivers getting to carry out a proper qualifying sim earlier, Verstappen having had to change the floor on his car (not personally) after running wide.

Consequently, as we head into the session, Mercedes has to be favourite, which in itself should be fun when you consider Valtteri Bottas' obvious improvement this season.

On the other hand might Ferrari or even Red Bull pull a surprise.

If the 'big three' are a conundrum, one hardly dares to think how the rest of the grid might look, with only Haas appearing to have both drivers competitive. Elsewhere, it appears to be a case of one driver having a good day and another an off day - in some cases literally...

Which brings us to the conditions. Though yesterday there were offs aplenty, courtesy of the new track surface and blustery winds, things appeared to be a little better this morning.

That said, driver were still struggling for grip, and while few would bet on the final order this afternoon, even fewer would risk their money on guessing the right tyre strategy.

While Barcelona has a reputation for boring races, that could all change this weekend, what with the track surface, the winds and the changing temperatures. Furthermore, as proven by Brendon Hartley, who crashed heavily at the end of this morning's session, this track can be as unforgiving as any street track if you push that little too far.

The Kiwi dipped a wheel onto the grass approaching T10 and that was it, the Toro Rosso, and its driver, suffering a mighty impact which essentially removed the back of the car.

Indeed, there is still a question mark over whether the car will be ready for this session.

Indeed, ten minutes before the start of the session, Toro Rosso confirms that the Kiwi will not participate.

Stroll is first out, and along with teammate Sirotkin you can bet your house on neither getting through to Q2 far less Q3.

Raikkonen is another early riser, as is Vettel, possibly with an eye on those clouds.

All are on supers bar Vandoorne and Alonso (medium) and the Panthers who are on softs.

Alonso advised of a tailwind into T7 and therefore a headwind in T1.

The Mercedes duo heads out, as does Ricciardo.

A 17.674 sees Bottas go third, as Grosjean improves to sixth and Magnussen fifth.

Ricciardo goes fifth with an 18.301 as Ericsson runs wide in T1.

No sooner has Alonso leapfrogged Ricciardo for fifth than Verstappen bangs in a 17.846 to take the clearly coveted spot.

Woah! Hamilton might have been right about the sandbagging after all. Vettel stops the clock at 17.031 to go top.

That said, having gone quickest in S2, Bottas dives into the pits, leaving the question hanging.

Ricciardo improves to third with a 17.623 as onboard with Hulkenberg reveals the Renault sounding rather sickly.

With under three minutes remaining, Hulkenberg heads out again.

All bar the Mercedes, Ferraris, Bulls and Sainz are on track.

Leclerc improves to 13th, but is it enough?

Hulkenberg goes 14th with an 18.923 which pushes Vandoorne down to 16th when Ocon also improves.

As Vandoorne improves to 15th at the death, thereby demoting Hulkenberg, Stroll is off and in the gravel at T13. Williams weekend goes from bad to worse.

An unusual off for Stroll, who loses the rear of the car exiting T12 and then spins off into the kitty litter lightly banging the barriers. When asked if he is OK, he shows enormous desperation in his voice as he sighs "yes".

The big question going into Q2, is who will take the big gamble - as in Azerbaijan - and attempt to qualify on the softs as opposed to the supers.

The Haas duo lead the way as Q2 gets the green light, followed by Hamilton, Bottas and Raikkonen.

As more drivers head out, the front runners, including the Haas duo, are on softs, while the rest are on supers.

Ricciardo goes fifth but is leapfrogged by his teammate who posts 17.266.

"They've done a really poor job of cleaning the track," says Hamilton, "there's so many stones it's dangerous."

Sainz goes ninth, ahead of Vandoorne and Ocon as - with 8 minutes remaining - Alonso and Leclerc have yet to post a time.

Sainz is the highest places driver on supersofts.

That said, Alonso posts an 18.100 on the red-banded rubber to demote his countryman.

PBs in all three sectors sees Leclerc go 13th, but he remains in ther drop zone along with Vandoorne, Gasly and the Panthers.

While Vettel appears to have settled for his time - and why wouldn't he - Hamilton heads out again, this time on supers. Then again, didn't he do that in Baku?

Verstappen and Ricciardo are also back on track, also on the supers.

Hamilton fails to improve his time, but remains on track. Next time around however he posts a PB in S1. As does Ricciardo.

Hamilton loses time in S2, as does Ricciardo.

As Grosjean runs wide in T7, Hamilton dives into the pits.

Sainz improves but remains ninth, while Alonso remains tenth. Indeed, the McLaren driver makes it to Q3 for the first time this season.

We lose Vandoorne, Gasly, Ocon, Leclerc and Perez. A strong performance from the Sauber driver, but a pretty awful showing from the Panthers.