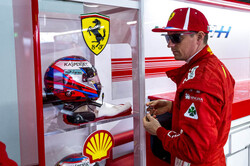 Ferrari is to replace the engine in Kimi Raikkonen's car following his issue in FP2.

The Italian team announced the decision via social media, tweeting: "Out of precaution, the full block (ICE+turbo+MGU-H) on Kimi’s car will be taken down for checks and replaced for tomorrow".

Around halfway through the session, a puff of smoke was seen from the rear of the car. While the Finn was told to stop the car, he was able to coast through the final downhill section and back to the pits.

"Today the session was a bit messy, but overall I think it was not too bad," said Raikkonen.

"At one point we had some issues and I was told by the team to stop the car," he added. "We still don't know what happened, but we'll figure it out.

"This evening we'll have some work to do; we'll go through everything and understand. Tomorrow morning we might get a better idea and know where everybody is. I'm sure it is going to be close."

As these are the first replacement required by the Finn there is no penalty, indeed, once checked, and providing they are OK, the various components can be put back in the driver's pool for use later in the year.