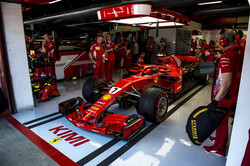 It was a Friday of mixed fortunes for Scuderia Ferrari drivers Sebastian Vettel and Kimi Raikkonen: while Seb managed to complete his daily routine, setting encouraging times in the final long run on Soft tires, Kimi had to coast back to the pits after being radioed to stop the engine because of an apparent malfunction. Gusty winds affected both sessions and the track felt obviously very different from winter testing, with temperatures around the 30 degree mark.

Sebastian Vettel: "Everything we put on the car seems to work and that's important. I think the biggest change that has been made is on the tires, which seem to be quite different. I don't think they are better than before. As for the changes you saw with the rearview mirrors, it is no big deal. Before, it was quite difficult for us to look at the cars behind. Now they are in a better position and I can see a little bit better below the rear wing. If you trust your car, there is no reason to try to push over the limit at this stage. Let's hope we have the same trust as in Baku where I could get everything out of the car when I had to. Today it was quite slippery and gusty and it was a mixed day. We can still work on the car and I think we should be stronger tomorrow."

Kimi Raikkonen: "Today the session was a bit messy, but overall I think it was not too bad. The wind made it a bit tricky, but we know that, at this time of year, it can be like that. The tarmac was the same as we had in testing, but obviously the weather conditions are different. We all know this track very well but every time we come here it's like starting from zero. We tried different things and learned from them and it was pretty ok most of the times. Maybe it was not the most straightforward Friday, but I think that more or less we know what we should do. At one point we had some issues and I was told by the team to stop the car. We still don't know what happened, but we'll figure it out. In the evening we'll have some work to do; we'll go through everything and understand. Tomorrow morning we might get a better idea and know where everybody is. I'm sure it is going to be close".