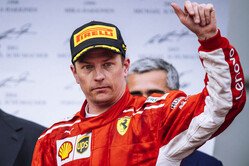 Other than that first lap 'difference of opinion' with Esteban Ocon, sharp-eyed fans will have notice that Kimi Raikkonen had pushed his luck already while making his way to the grid when the pitlane opened, the strong winds causing the Finn to almost hit the wall.

However, speaking after the race, the Iceman revealed that another late incident - just a couple of laps from the end - almost cost him a hard-fought second.

"On the first lap after the restart on the little kink coming to the last part of the straight I hit the inside wall at full speed," the Finn revealed. "I'm pretty lucky that the front wheel didn't go. I was expecting to go off quite fast, but I was lucky.

"I had a lot of close moments," he admitted. "We were kind of a bit on the limit, it was not the easiest race. It was not the most enjoyable. Some laps very good and some laps I had to try not to hit the wall.

"The feeling was there but not consistently," he added, "so I thought ‘OK, I just try to go as fast as I can but a little bit safer'.

"Maybe today certain things worked in our direction," he admitted, "but whatever happened in front, it's self-made issues in many ways. The Red Bulls, look what they were going to do, I was pretty certain something was going to happen later when they got close to each other. We stayed out of trouble, in this kind of race, knowing what happened last year, it's going to pay off.

"I wouldn't say I've had a lot of luck over the years," he added, "but I don't count that, you cannot count that. You get what you deserve, in a way, and sometimes you're lucky. If you look all over the years I'm far from the positive side."

Referring to the first lap clash with Ocon - for which (obviously) the Frenchman lays the blame at the feet of Raikkonen, the Ferrari driver said: "I was inside in the corner and I don't know if he didn't see but he just turned in. He came off worse out of it. I thought he'd know I was there because I was next to him.