Vettel: So far we can be happy 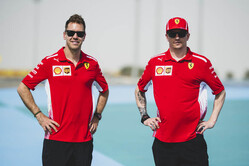 While Lady Luck was there for him in Melbourne, and to a certain extent in Bahrain, she turned her back on Sebastian Vettel in Baku, giving victory, and the championship lead, to arch-rival Lewis Hamilton.

Nonetheless, the German heads into the Barcelona weekend feeling positive.

"At the beginning of the season you don't know how strong you can be," said the German, "but I think that so far we can be happy.

"We have been very competitive and we've had a chance to fight for the win during most of the races so far," he continued. "Having said that, there are still many races to go, so it is pointless to talk about what will happen at the end of the championship. Right now I think it is important to maximize everything in the race.

"It is natural that we want to win, so if you get the best result every weekend and are in a position to fight for the championship, then it will be good news. But we cannot say too much before. I believe that small things can make the difference. We'll keep working on updates and see what they can bring."

"It's hard to know what will happen this weekend," added teammate Kimi Raikkonen, "it depends on many things. Obviously, everybody has done a lot of testing on this track, but the conditions are totally different at this time of the year.

"So far we have been strong and fast everywhere; we expect to be at least up there in the fight.

"Qualifying is important here as it's hard to overtake on this circuit; but in the end, it's not that much different from most of the places we race in. After all, in last year's race we have seen quite a lot of overtaking, so we'll see how things turn out this year and how the tires work.

"We know roughly where we are and what we are doing and we also know that the result is not always a given, whoever is the strongest. We keep working and improving. It's pretty close between the top three teams; avoiding any mistake and issues, you give yourself a better chance to be on top in the end."