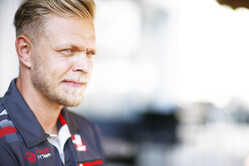 Kevin Magnussen has been officially reprimanded by the Barcelona stewards following an incident they deemed "potentially dangerous and unnecessary".

In the final stages of FP1, the Dane appeared to impede Charles Leclerc who was on a hot lap, the Monegasque youngster clearly incensed by the incident.

The stewards, who include former F1 veteran Dereck Warwick, reviewed in-car video, track video, marshalling data and car telemetry regarding the incident as well as hearing from Magnussen and a Haas representative.

Magnussen explained that he had received a yellow flag at Turn 10 and had aborted his lap. He was unaware that the flag had cleared and that Leclerc who was immediately behind him had not aborted his lap as he had not been in the sector when it was yellow.

While the stewards accepted this explanation and found that there was not a case of unnecessarily impeding Leclerc, and therefore not a breach of Art 31.5. of the Sporting Regulations, they reviewed the manoeuvre at the entry to Turn 1, where Magnussen moved to the right in front of the Sauber which was overtaking at the time.

While the cars avoided a collision, the stewards deemed the manoeuver to be potentially dangerous and unnecessary, and therefore a breach of Art. 27.4.

As a result the Dane was handed a reprimand, his first of the season.