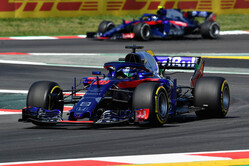 Following yesterday's opening sessions, despite his team leading the way in both, Lewis Hamilton suggested that Ferrari is "sandbagging".

With Sebastian Vettel giving little away, one can only assume that his inscrutable smile was a clue.

Certainly, over the next hour a true picture should emerge, and the teams will get to know whether their various updates have worked.

While Mercedes has made an obvious improvement, Red Bull appears to have made an even bigger step forward, both Daniel Ricciardo and Max Verstappen looking strong.

An engine issue in FP2 has led to Ferrari changing the unit in Kimi Raikkonen's car, though neither the Finn nor his team appear unduly concerned.

Adding to the conundrum yesterday were the conditions, as blustery wind and new track surface that caused problems for one and all.

Indeed, so nervous were the cars that the remainder of the weekend could be something of a lottery as even the best make small but costly mistakes.

As ever, Mercedes had tyre issues, the Silver Arrows clearly preferring the soft over the supersoft, which could make qualifying and the race interesting.

If the pecking order of the 'big three' was unclear, so too was that of the midfield. At the end of FP2, Haas led the way, ahead of Force India and McLaren.

Both Renault and Toro Rosso suffered mixed fortunes, one driver doing fairly well, the other not so, while Sauber also looked good.

The biggest surprise was Williams, both drivers over 3.2s off the pace, and Robert Kubica, who drove in FP1, admitting he was embarrassed by the FW41.

It's cooler than yesterday - though earlier in the day than FP2 - which should suit the supersofts.

Ericsson is first out of the trap, followed by Leclerc, Alonso, Vandoorne, Grosjean and Raikkonen. All bar the Finn are on supersofts, the Ferrari driver on mediums.

"Ooh that was a good one, such a difference," says Hulkenberg at the end of his installation lap.

Hartley posts the first time of the day, the Kiwi crossing the line at 20.486 on the supers. Though he struggled with the rears in the final sector, he claims the car is better than yesterday.

As the Williams duo head out, both on the mediums, dark clouds can be seen in the distance.

Admitting that he needs to manage his rears better, Hartley improves to 20.073. Thirteen minutes into the session he is the only driver to post a time.

An 18.324 sees Vettel go quickest, the German having been quickest in the tricky final sector. Bottas was on the softs.

Also quickest in the final sector is Hamilton who leapfrogs Vettel with an 18.112.

Another improvement from Bottas who gets down to 17.873.

A 19.343 sees Vandoorne go eighth, slipping in behind his teammate.

Approaching halfway, Hulkenberg and Sirotkin are the only drivers yet to post a time.

"Ricciardo setting some interesting times on the medium," admits Pirelli, "this could be quite important for race strategy." The Australian is currently fifth, just 0.787s off the pace.

Elsewhere, a mistake by Verstappen in the first sector sees the Red Bull driver abort his lap.

Quelle surprise, Grosjean is unhappy with his brakes.

Verstappen is under investigation for not rejoining the track in the correct manner following his off in T2. Bollards, as they say.

Hulkenberg finally sets a time, the German subsequently improving to eighth with an 18.950.

Brake issues or not, Grosjean is currently best of the rest, sixth, just ahead of his Haas teammate.

Following a period in the garage, Vettel heads out again on a new set of supers.

Ricciardo is also back on track, the Red Bull sporting the same set of mediums used previously.

Stroll is off at T4, the Canadian clearly carrying too much speed into the corner. He does well to get through the gravel and back on to the grass.

On those supersofts, Vettel posts 17.604 to go top, as Hamilton and Bottas now head out on the red-banded rubber. Can they make them work today having failed yesterday?

"We're seeing all three tyre compounds out on track at the moment, as teams work out different strategy permutations," says Pirelli. "With grip levels variable, and a risk of rain as well, it's hard to know what to do."

Raikkonen improves to 17.581 as replay shows Hamilton's timesheet topping lap wasn't perfect meaning that there is more to come from the Briton, assuming his tyres are up to it.

In the Red Bull garage, the floor is being changed on Verstappen's car.

Though still very quick in the first two sectors, the Mercedes duo are clearly losing out in S3. That said, Bottas improves to 17.294, closing to within 0.013s of his teammate.

Alonso leapfrogs the Haas duo with am 18.847 to go sixth. McLaren yet to make it into Q3 this year.

With 11 minutes remaining, the Force Indias are keeping the Williams company at the wrong end of the timesheets, however, we feel the Panthers won't be down there for long.

Clearly put off by a slow Sirotkin, Grosjean runs wide and the through the gravel. The team does its best to placate the fiery Frenchman, as he shouts; "What the...?"