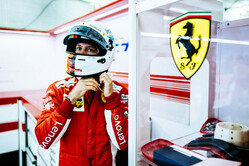 With its raft of updates appearing to give Red Bull a significant boost yesterday, the Austrian outfit looks to be the biggest threat to Mercedes this weekend, which itself appears to have taken a significant step forward.

On the other hand, Ferrari appeared to have lost a little ground to both teams, though Lewis Hamilton suspects all is not what it seems.

"I think it's still very close," he told reporters. "I'm not really quite sure where Ferrari's pace was today, but they're probably sandbagging, or something, they'll bring it out tomorrow.

"The Red Bull's obviously very close to my pace," he continued, "so I think, again, it's going to be relatively close between the top three teams. I can't really tell you which one's quickest at the moment, because again, fuelling levels and maybe one didn't get their lap or something like that, tomorrow we'll get a much better understanding."

Sebastian Vettel, as ever, was giving little away, his smile as inscrutable as ever.

"The car's OK, the updates are working, I can feel the car is better," he said. "The biggest change came from the tyres, they seem to be quite a bit different.

"Let's hope we have the same trust as in Baku where I could get everything out of the car when I had to," he added. "Today it was quite slippery and gusty and it was a mixed day. We can still work on the car and I think we should be stronger tomorrow."