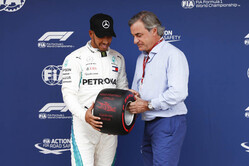 Alternative tactics were adopted by the majority of the field at the Spanish Grand Prix, with nearly all the frontrunners in the top 10 choosing to set their fastest times on the soft tyre in Q2, in order to start tomorrow's race with this compound. The only exception was McLaren's Fernando Alonso, who will start on supersoft.

Track conditions were cooler than they were yesterday, with 20 degrees centigrade ambient and 25 degrees of track temperature today. The weather forecast indicates a chance of rain showers tonight, which could alter the usual pattern of track evolution.

The previous all-time current track record, set in pre-season testing on the hypersoft, was already broken in Q1 by Ferrari's Sebastian Vettel: the new record now stands at 1m16.173s, Hamilton's pole position time for Mercedes on supersoft. The soft was also seen extensively in Q3, with teams trying different approaches to unlock performance.

Mario Isola: "The top teams have chosen to start the race tomorrow on the soft tyre, which keeps their strategic options open. We also unusually saw plenty of strategic variance in Q3, with teams split between soft and supersoft tyres. Despite this, the times between all the top teams were actually quite close. Either one or two stops are possible for the race tomorrow, but this will obviously depend on degradation rates, which might be influenced by any rain that falls tonight. Whatever happens, there are already a number of interesting question marks that should hopefully add some additional tactical elements to a race that is generally quite dependent on qualifying position."