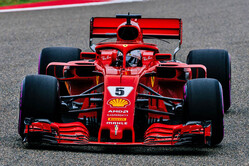 While his stop under the Virtual Safety Car (VSC) worked to his advantage in Australia, in Spain it was to cost Sebastian Vettel an almost certain podium position and allow title rival Lewis Hamilton to extend his championship lead to 17 points.

While many questioned Ferrari's strategy - not for the first time - not least the decision to send him out on another set of mediums, Vettel defended the move.

"We couldn't make the tyres last, so for us it was clear we come in again," said the German. "I think it was the right thing to do. We were going through the tyres too quick and therefore we were not able to stay out for another 23 laps.

"Even in the end, with the fresher set I wasn't able to attack until the end," he added.

The German's cause wasn't helped by a self-confessed error.

"Obviously, you have to slow down, the tyres are getting cold and it's my mistake," he said. "I came into the box maybe a bit hot... well, cold with the tyres, and overshot the position. And then the guys had to reshuffle and I think that cost us a bit of time. We had some traffic in the pitlane as well."

Reflecting on a race which witnessed an emphatic 1-2 for Mercedes - which also re-took the lead in the Constructors' Championship, Vettel admitted: "One, we were not quick enough. If we are not able to see that then we are more than blind.

"Second," he continued, "I think we struggled a little bit over the course of the weekend with the tyres. They changed, but they changed for everyone.

"Third, I think it was a poor weekend in terms of reliability. Kimi had an issue with the engine yesterday and had to change the engine, and then obviously retired in the race."