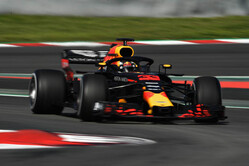 All ten teams were in action just days after the Spanish Grand Prix, with Mercedes, Ferrari and Red Bull serving notice of their intentions by running their race drivers.

Indeed, Mercedes is the only team running both its regular race drivers this week which means that reserve driver George Russell will probably drive both days in Hungary later in the year.

On a day when there were no red flags, the 13 drivers on duty completed 1,438 laps. Three of the drivers, Lando Norris, Russell and Oliver Turvey were on duty for Pirelli testing 2019 prototype tyre compounds.

Two days after scoring Red Bull 150th podium, Max Verstappen was back behind the wheel of the RB14. On a productive day for the team, the Dutch driver worked through 148 laps on his way to the top of the timesheet, logging a best time of 1:17.528 on supersoft tyres in the final hour of the session.

"Today was about gaining even more understanding of the car and tyres and we completed more than the programme we set out, so it was very good," he said. "We did a lot of laps today and I think if it was day one of winter testing I'd feel it, but it was no problem today and physically everything was fine.

"That's my test over now and the next stop for me is Zandvoort this coming Sunday, where Daniel, myself and David Coulthard will be doing some show car runs, and I hope we can give all the fans there a really good show."

"We had a really productive session today," added Senior Projects Engineer, Jeff Calam, "and while it was probably a pretty long day for Max, and for him not the most exciting, it was a really good day for the engineers, as we got through the whole programme we'd set out for the day.

"Today was mostly divided into understanding the tyres more, with the upcoming races in mind, and testing development parts. Everything went according to plan, we got a lot of data and we're very happy with progress. We got in a lot of laps and a decent time, so all in all we're very happy.

"Tomorrow, Jake Dennis, who is a Simulator Development Driver with the team, will take over from Max and it represents a really good opportunity for him to experience the RB14 first hand."

The French outfit's programme focused on an array of test items and evaluations aimed at improving performance.

"It was a busy day," admitted the Spaniard, "but certainly a productive one for me and the team. The main focus was on completing a number of tests and evaluations and discovering how to extract further performance from the car. It's been a busy few days, a lot of laps completed, and certainly beneficial for our progress."

"We had a comprehensive programme to get through today," added Alan Permane, the team's Sporting Director, "and Carlos worked through this methodically and consistently.

"We are looking at many elements of the car to see where we can best deliver performance gains. It's been a productive day with 119 laps completed so we have plenty of data to work from, and now we're looking forward to seeing Jack Aitken in the car tomorrow for his first run in the R.S.18."

Various developments were tried out on the SF71H, "but not aimed at Monaco" clarified Vettel, "because that race is too much of a one-off. Let's say we got some ideas and now we have to turn them into reality."

The German's best time of 1:17.659 was set in the afternoon on soft tyres, of the type used at the start of the season and not in last weekend's GP.

"We learned various things on how to work on track like this one," said the German. "We know we have a strong car."

Tomorrow, Antonio Giovinazzi takes over at the wheel of the SF71H.

Two days after his first lap incident, Romain Grosjean logged 129 laps, with his quickest time coming on his 37th lap - a 1:18.449 set on the hypersoft tyres that placed him fourth overall.

The Frenchman began the morning session with an installation lap on the hard tyre before a 10-lap stint on the softs. Two runs of 12 laps each on supersofts were followed by a change to the grippier and, subsequently, faster hypersoft rubber over two outings totaling 16 laps. He then switched back to the softs for two 11-lap drives prior to the mandatory lunch break to take his morning tally to 73 laps.

He ran ran 56 laps in the afternoon session with a program consisting of three 11-lap runs on the mediums before switching to the ultrasofts for two outings of eight laps apiece. He closed the day with a seven-lap run on a used set of mediums.

"It's been a very good day and a very productive day for the team," said Grosjeran. "We've done a lot of mileage and we haven't had any issues with the car. The circuit was a bit dirty, initially, in the morning. The grip was a bit low - it was fresh. It got better and we got some really decent running. We did some very good testing with the car. We've learned a lot about the different tires and setup work, which you don't get to do on a race weekend.

"The feeling was super good, and I think it was important to get back on the horse after not being able to complete the grand prix on Sunday. So, feelings were good. Hopefully, they stay there for Monaco and the rest of the season. I'm very happy with the job that everyone's done on the day."

While George Russell drove a Force India for Pirelli, the main test duties for the Silverstone outfit fell to Nicholas Latifi.

"I was really looking forward to my first outing," said the Canadian, "especially after the disappointment of missing out on pre-season testing (due to illness).

"It was a very good first day on track with the team and I finally had the chance to put to practice a lot of the procedures and processes that I had learnt in the simulator.

"I am pleased with how the day went; we ran smoothly with no big dramas. We completed lots of laps and I couldn't have asked for a better first day. I am glad I could help the team with their testing programme and I am looking forward to being back in the simulator with this new knowledge of how the car behaves on track."

"It was a very solid performance by Nicholas on his first day in the car," added chief race engineer, Tom McCullough. "Our programme included a series of aero test items with extra instrumentation on the car in the early part of the day, which allowed him to get up to speed with how we operate and with understanding the VJM11.

"Nicholas settled in well with the team from an operational point of view and was on top of the various switches and procedures straight away after the simulator work he did earlier in the season. We were able to get straight to the various test items and completed the main objectives. It was a good day and a great start to our on-track relationship with Nicholas."

It was a productive day of running for Mercedes, with Lewis Hamilton completing aero data collection throughout in order to check correlation between the wind tunnel and the recent aero updates. Other priorities were work on the setup and engine development.

The German team also attracted special attention as it tried out new rear-wing mounted rain lights on behalf of the FIA. Though there was no rain on the plain in Spain today, the sport's governing body still wanted to test the lights in the hope of introducing them next season.

"It was a good day and a relatively interesting test, I'm glad we did it," said Hamilton. "We got through a large programme and did 151 laps which is a good sign of reliability. I'm looking forward to Monaco; hopefully we can take some of the things we've learned onto there."

"We've had a very good day with Lewis without any real issues on the car," added Andrew Shovlin. "We had a good baseline to work with from the test, so our focus has been further understanding the car and tyres. We had a comprehensive aero data collection programme which we got through whilst the track was cold first thing, then got stuck into proper running for the remainder of the day.

"It's difficult on a race weekend to complete proper tests due to the limited number of tyres, the constantly evolving track and the requirement to get the maximum speed out of the car. Here we were able to step through a large programme of setup items, so Lewis has been able to get a good feel for the effect of these changes and hopefully that will help us get the most out of the car at the upcoming races. We've got Valtteri in the car tomorrow and another very busy day planned."

Stoffel Vandoorne got behind the wheel of the MCL33 for a full day of running, building on the tests conducted of the new parts brought to the track during the Spanish Grand Prix weekend.

His run programme centred on shorter runs with multiple changes between them, as the team took the opportunity to test a number of different components, settings, tyre compounds and fuel loads, and analyse aero correlation.

On the Pirelli car, Lando Norris ran a low-fuel programme in the morning, while Oliver Turvey ran with a higher fuel set-up in the afternoon. Both Pirelli and the team were satisfied with the running conducted during today's closed test with the sister McLaren, and reported that both drivers completed their planned programmes in each session.

"Today's programme had a bit of a slow start as we were checking and testing various things," said Vandoorne, "but in general it's been quite positive.

"We went through a lot of analysis of the new aero package and did a number of tests to understand it a bit better and get a read on exactly how it's affecting the behaviour of the car. We also did a bit of tyre testing, which again helped us gather some more useful information for set-up.

"In the end, we did some good mileage, and I'm pretty happy with the learning from today. Tomorrow I'm driving the Pirelli car - a different programme entirely from today, but still a good opportunity for more time in the car."

Check out our Tuesday test gallery from Barcelona, here.