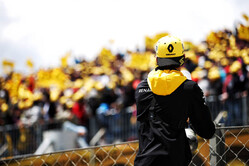 Nico Hulkenberg had a very short race after the rear of his R.S.18 was collected by a spinning Romain Grosjean, pitching both into retirement on the first lap.

Nico started from P16 on new Medium tyres, however his race was end early due to an accident damaging the rear left suspension of his car.

Carlos started the race from P9 on Soft tyres, stopping on lap 25 for a new set of Medium tyres which he used till the chequered flag.

Nico Hulkenberg: "It was messy into turns one and two but in turn three it got a lot messier. I saw a car spin in front of me and a lot of smoke. It happened very quickly so I couldn't avoid Grosjean spinning backwards into my car. It's a pity as we were competitive, we have good pace so it's frustrating not to have shown that yesterday and today. It's difficult to swallow, especially when it's not your fault. We'll have to try again in two weeks."

Carlos Sainz: "I think it's a very positive result for me and the team. We can be very proud of what we've achieved this weekend as this track was not ideal for us. We turned things around well since Friday, did a very good start and managed to finish seventh which I think was the best we could hope for. It feels great to get another good result at home and I hope the fans have enjoyed the race. Many thanks to all for their support! It's good progress for the midfield fight and important points for the team. We have areas to work on, but we are making good progress. Let's keep pushing."

Cyril Abiteboul, Team Principal: "We'e leaving Barcelona in positive spirits. Our target is to be in the points at every race and we achieved that with Carlos through another strong performance from him. He also qualified in the top ten, reinforcing the pace of the Renault R.S.18. We'e happy that this result takes us one point ahead of McLaren in the Constructors' Championship, meaning for the first time we'e in fourth. The battle is very tight so we need to keep developing and performing at our best. We need to eradicate the gremlins, such as those which affected Nico's qualifying. Nico was blameless in an unexpected accident on the first lap, but starting in a lower grid position makes you vulnerable to these sorts of incidents. Overall it has been a weekend with many positives which we will build on as we head to Monaco."