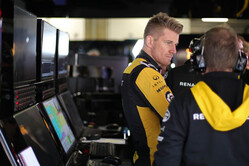 Renault Sport Formula One Team drivers Nico Hulkenberg and Carlos Sainz finished in the top ten in qualifying for tomorrow's Azerbaijan Grand Prix. Nico put his Renault R.S.18 into ninth with a lap of 1:43.066 round the streets of Baku, just two tenths of a second ahead of Carlos.

Nico will start fourteenth after a penalty is applied for changing his gearbox following the earlier morning practice session.

Nico Hulkenberg: "We lost some time this morning so we can be pleased to get both cars into Q3. The balance in the car doesn't sit quite where I would like it to, but some race weekends are like that and we can be happy that we gave it everything and tomorrow we will do the same to make up positions. The gearbox penalty is pretty bitter in this way, but we need to come back with the best strategy and fight hard. The good news is that you can overtake here and know there will be safety cars, so let's see what we can do."

Carlos Sainz: "It was a decent qualifying for us. I missed the perfect first sector but getting both cars into Q3 again shows good consistency and effort from the team. Tomorrow we need to have a clean start and target to stay in the points again. It could be another chaotic race so we need to be ready to maximize our chances."

Is that a satisfying result today for the team?
Alan Permane, Sporting Director: "We can be pretty satisfied with that qualifying result. We didn't have a good FP3 this morning due to various issues, so we were happy to get both cars into Q3. Our competitors for fourth in the championship are behind us, which puts us in a stronger position, but we need to concentrate on our own race and the midfield, which is again extremely tight. Nico will have a five-place grid penalty after a gearbox change, but as we've seen in the past here it's a tough race. We'd hope and expect him to recover and we're targeting points for both cars tomorrow."

We are expecting quite unusual weather conditions tomorrow, will that have an impact on the race?
AP: "The high wind is a consideration for everyone, there's not really a great deal we can do. We've experienced cars running in high wind before and know it's difficult to manage, but most of the track is sheltered with the buildings so I don't think it will have too much effect."