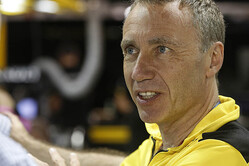 Cyril Abiteboul, Renault Sport Racing Managing Director: Azerbaijan delivered our best result to date since returning to the sport in 2016. We appreciate it took special circumstances, but it does not take anything away from the fact we are now in a position to capitalise on any opportunities. Our progress is clearly illustrated in the data in a number of ways; for example our gap to pole has halved from last year.

The start of the European season now needs to see a consolidation of that performance. We will be helped in Spain by a step on the engine side with new fuel and some aero tweaks to reflect the characteristics of the track. We hope this to be a move forward, but we also recognise that many other teams will bring upgrade packages too and Barcelona is well known to everyone.

We need to push for points and that fourth position in the Constructors' Championship, which is well within our grasp now but I expect it to be a lot tighter from now on in. Our target remains reliability and scoring points at every race if we are to achieve this.

With this in mind we can look forward to Spain with enthusiasm and lots of hope.

A fifth-place last time out gifted the team its best result in Formula 1 since returning to the sport in 2016. Now it's back to familiar surroundings in Spain for the first European race of the season, as Chief Technical Officer Bob Bell explains the ins and outs of the Circuit de Barcelona-Catalunya.

What are the main challenges of the Circuit de Barcelona-Catalunya?
Bob Bell: It's a great testing track with a mix of high-speed and low-speed corners. You get a good view of all the conditions the car operates in, which is beneficial for development. To get the best from the circuit, you need a car that is good in the high-speed and also good in the low-speed. It's a nice, average track, which tests all things; the aero balance, engine performance and braking performance. Nothing really stands out as something you have to nail, everything needs to be good to go well in Barcelona. We went well there in winter testing and there is no reason why we can't replicate that when it comes to the racing.

Given the extensive winter testing programme, are preparations easier for this race?
BB: We know the track with the new cars better than any other track, but it doesn't make too much difference in terms of preparation. The climatic conditions are different, going from a cold winter track to an early summer environment. Track temperature will be different and that often catches us out. In the winter there didn't seem too much of a step between Pirelli's Soft to Ultrasoft tyres. We might find with proper track temperatures that will change and this will be the first time we run on the new track surface at this time of year. The circuit isn't particularly hard on tyres, so it won't be like China where a lot of the teams had issues with strategy; it'll be clearer in Spain.

Spain often sees a raft of car developments unleashed, what will we let out of the upgrade cupboard?
BB: Traditionally Barcelona has been where all the teams have brought upgrades; usually a major aerodynamic upgrade. This year, the first big aero upgrade package was in Baku. In Barcelona, we'll have less brand new elements. For the foreseeable races, we have upgrades coming at each race, some small, some bigger.

How would you summarise Renault's start to the 2018 Formula 1 season?
BB: I feel very positive and it's all built off from what we did at the factory and in winter testing. We had a very successful and reliable test and that's been mirrored into the first four races with consistent points. The performance of the car has been pretty much where we thought it would be from winter testing. We have a very stable platform, which is a great place to be in order to develop and make the car better and better as the season progresses. Confidence is up, and we believe we can fight where we want to be. It's never easy, it's hard fought and we have to push hard all year to get the developments coming and keep us ahead of the rest of the midfield pack. We're in a good place with a solid foundation.