Renault duo look ahead to Spain 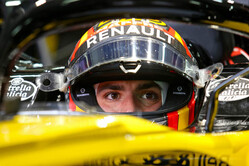 Nico Hulkenberg is ready to dust himself down after his misfortune in Baku as he sets his sights on a better run at the Circuit de Barcelona-Catalunya for the first European race of the season.

You must know the Circuit de Barcelona-Catalunya pretty well?
Nico Hulkenberg: It's a circuit all teams know really well as we rack up a huge number of laps there each year with winter testing. Engineers, as well as drivers, have a lot of data and knowledge about it, so we'll be looking to maximise our pre-race preparations to hit the ground running on Friday. I like the layout, especially the first sector with turns 1-2-3, which are especially quick with the low downforce cars. It's a physical circuit to navigate with a couple of high-speed right handers. It's important to prepare the neck for this endurance challenge, and after the race you usually feel the aches and pains!

What are the secrets for a quick lap time?
NH: The first few turns are almost like one big corner as turns 1-2-3 seem linked when at high-speed! You need to carry momentum through turns one and two, if you don't, you will compromise the very fast turn three and be in trouble running into turn four. Sector two contains another very fast right-hander and a straight. Sector three is the most tight and technical of the three. It's twisty and slow, especially through the last chicane, but we have to nail the apexes in order for a quick lap time.

Do you enjoy visiting Barcelona on the Grand Prix weekend?
NH: Barcelona and the surrounding area is a cool place to visit. You get a sense of a proper Spanish vibe there as it's by the sea with lots of good restaurants and places to chill out. It's always one of the louder races of the year and there's always a really good turnout of fans. That's great to experience when we're on track and I love the Spanish passion. It does mean, though, I have to leave for the circuit a little earlier in the morning to avoid the traffic!

How do you reflect on Baku?
NH: We all have bad days. What happened was unfortunate, but that's racing as the saying goes. It's time to reset and refocus and look forward to Spain, where I want to make amends.

&#8195;
Carlos Sainz is primed and ready to do the business at his home Grand Prix, as he heads to Spain on the back of some positive momentum after his hard-fought fifth place in Baku.

What, in particular, makes the Spanish Grand Prix so special?
Carlos Sainz: It's the most special Grand Prix of the year for me and it feels so different to any other race. Wherever I go throughout the weekend, there's always people cheering, it's a real privilege to experience. It's a busier weekend than normal, but I enjoy that, and I realise I'm very fortunate!

Are you looking forward to seeing your fans in the Carlos Sainz grandstand?
CS: It's awesome to have my own grandstand. We started back in 2016 and ever since, fans have been so grateful and supportive so it's totally worth it. We have nearly 4,000 fans this year, near turn five, and it's going to be very special to drive past them on every lap. I can't wait for it again this year and hopefully I can put on a show for them.

Talk us through a lap of the Circuit de Barcelona-Catalunya...
CS: It's three quite different sectors, each with some fast and flowing corners. The tarmac is new this year all around the track and this makes it even more interesting. Turn three is extremely quick in this year's cars, and we hold it flat out, while clinging on in sixth gear. Turn five is where my fans are and we then accelerate down the hill into my favourite part of the track. It's a quick, uphill turn seven followed by another flat-out right-hander. Then it's DRS down the straight and into the last part of the track. We need good traction throughout this sector as it's very tight with no room for mistake. It's about hogging the inside kerbs as much as possible to find the shortest route. Finally, we have to negotiate the chicane, where we want to maximise the kerbs, before accelerating flat-out from the corner to finish the lap.

Why do you think you go well in Spain?
CS: It's a track I know very well since I was young. Also we get to do the tests here, both in winter and after the race, so every Formula 1 driver is very familiar with the track layout. I've raced in three Spanish Grands Prix so far. Each of them have been very special and I've managed to get some good results here. I think that shows all the support I receive works and it's like having an extra boost. With all the fans giving support, we become very strong! I hope I'm able to keep it this way this season and continue the good trend of results at my home race.

What can you recommend to do and see in Barcelona?
CS: Of course, I have to recommend to try as many traditional Spanish dishes as possible. The food is so good here! I seem to mention food in a lot of my race previews! More specifically, Barcelona is a very charismatic city. There are so many things to do. Visiting La Sagrada Familia or the Casa Batlló of Gaudí, shopping around La Rambla or just enjoying a drink by the seaside are some of the many things you can do here. It's a fantastic city and I love it.

What's the post-Baku feeling?
CS: It is a really strong result for the team and myself, which we had to battle for. Now it's time to look forward and put all of our efforts into backing it up with another positive result in Spain. I'm working really hard with the team to extract the maximum of the Renault R.S.18 and I'm confident we'll get there step by step.