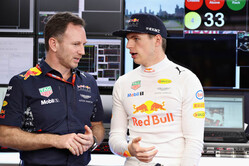 Winning first time out in the Red Bull may well have been the worst possible thing to have happened to Max Verstappen. Already tipped as the 'next big thing', it put the teenager in the full glare of the media spotlight, and just 24 races into his F1 career set a standard that few would truly wish to need to aspire to.

While his ballsy performances make him one of the most exciting talents on the F1 grid, it is the sheer number of incidents he is involved in that often get him into the headlines for all the wrong reasons.

A needless crash in FP3 in Monaco, which bore an uncanny similarity to an incident just two years earlier, was the latest in a string of incidents this year, a year in which, so far, he has clashed with all three drivers that currently head the standings.

Team boss Christian Horner has faith in the youngster however, and believes that many fail to understand that in many ways he is still serving his apprenticeship.

"Max arrived in F1 very quickly so he is doing his learning in a very public arena and is in a front running car very quickly," said Horner, according to the official F1 website.

"Most guys would have gone through some of this in the lower formulas that you wouldn't have even seen, whereas he is having to deal with it in a very public arena. I'm sure he will emerge from it on the other side."

In terms of his 'bad spell', the Briton said: "The only person who can address it and deal with it is Max".

However, he also believes that help could be close at hand, indeed, just across the garage.

"He has a very good teacher in the car next door to him," he said. "Max has an abundance of talent and had some harsh lessons this year and I think a modified approach will benefit him. The Monaco weekend was very painful for him.

"He's very aware," he added. "We talk weekly. Of course what frustrates him is that he's working harder than ever, feels fitter than ever and it feels like he's just trying a bit too hard at the moment. When you get into a spiral and try harder I think you just need to hit the reset button."