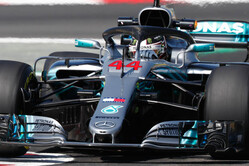 Just two days ahead of the start of the Canadian Grand Prix weekend, Mercedes has announced that it will not be introducing its planned engine upgrade.

"Although we had hoped to introduce PU2 this weekend, a quality issue means that this has now been delayed by one race," said a team spokesman.

"So all Mercedes-powered cars will be running PU1 for this weekend, too, before receiving new units in France."

Renault, Honda and Ferrari are all expected to be introducing their upgraded engines this weekend, a weekend when almost all drivers were expected to make their first scheduled change under this year’s three-engine rule. Indeed, only yesterday, as he looked ahead to the Montreal race, Toto Wolff said that the Mercedes-powered drivers would be taking their second engines of the year.

"We expect a number of teams to take their scheduled second power units this weekend, including all the Mercedes-powered cars, and we are pushing hard to bring more performance to the car as soon as possible," he said.

With the update delayed, it is likely that the Mercedes drivers will opt not to run their second units of the season, though it is unclear when the upgraded power units will appear.

While the news will be frustrating for Mercedes drivers Lewis Hamilton and Valtteri Bottas, not to mention customer teams Force India and Williams, its clearly better that the issue was discovered sooner rather than later.