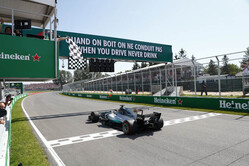 "Monaco was a weekend of damage limitation for us," says the Austrian ahead of this weekend's Canadian Grand Prix, "and we delivered on that objective with solid finishes for both drivers.

"We headed there expecting to have the third fastest car and that's how it proved. In that context, our results were satisfactory - but we don't want to use the phrase "damage limitation" too many times this year.

"There has been lots of comment since the race about how interesting it proved - or otherwise. I think it's something we need to keep in proportion: sometimes football matches end nil-nil, sometimes they are six goals thrillers. It's all part of the ebb and flow of a sporting season.

"Montreal is a venue that almost always delivers an action-packed race," he adds. "It's a circuit where overtaking is relatively straightforward, speeds are high and the cars are pushed to their limits; likewise, the concrete walls punish any mistakes heavily but the drivers need the confidence to use all of the track in qualifying, when it usually comes down to very small margins around a short lap.

"In recent years, Mercedes has performed well in Montreal - and it's one of Lewis' most successful circuits, too. However, past performances bring no guarantee of success this year. We will need to make sure we get the most from all the tyre compounds, including the hypersoft, if we want to come out on top this weekend.

"Canada also marks the one third point of the 2018 season. After six races, we can see that we are in a stronger position in both championships than we were 12 months ago. But we also know that the battle is more fierce, with ourselves, Ferrari and Red Bull in the contention for race wins every weekend; there is not a moment to relax.

"We expect a number of teams to take their scheduled second Power Units this weekend, including all the Mercedes-powered cars, and we are pushing hard to bring more performance to the car as soon as possible. It will be a close-fought weekend - as it has been at every race so far this year. We're looking forward to the challenge."