Renault duo looks ahead to Canada 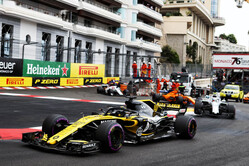 Nico Hulkenberg made a return to the points last time out with a hard-fought eighth place. Now the German is determined to follow that up in Canada for the seventh Grand Prix of the 2018 season.

What are your thoughts on the Canadian Grand Prix?
Nico Hulkenberg: Canada is a fantastic weekend. The city, the atmosphere and the circuit itself all make it an enjoyable Grand Prix. The track has a nice flow to it, despite being slightly green and dirty when we arrive as it's part street, part race track. There are big walls on the exit of corners, as well as some kerbs to ride. It's an enjoyable lap to drive.

What does the car have to go through in Montreal?
NH: Canada is about top speed and finding the right downforce balance. There are a couple of long straights with hard braking zones at the end of them. It's probably one of the toughest circuits out there for brakes, and you need confidence to be able to stop at the same rate, lap after lap, especially when you're trying to go deep into corners. Setting up the car to ride kerbs in Canada is also important to ensure a fast lap time.

What's the Canadian atmosphere like to experience?
NH: It's usually a really good atmosphere in Canada, you can see how much the locals relish Formula 1 when it comes to town and we always receive a nice reception there. The hairpin is where you feel that buzz, as you're surrounded by grandstands and that creates a lot of noise!

Where can a race be won and lost in Canada?
NH: Overtaking opportunities are fairly limited in Canada, but the final chicane is the best place to send one! In fact, it's probably the place which can make or break a lap. Strategy could be interesting again, as we'll be running the Hypersoft tyre, like in Monaco. There'll be some options in that area, and lap times are likely to be very fast!

How does The Hulk reflect on Monaco?
NH: We bounced back well after missing Q3 in Monaco, making the most of a reverse strategy for some good points in the race. I think it was a bright weekend overall and important for the team to have both cars inside the top ten. Now we want to build on that by repeating it in Montreal, only slightly higher up the order!

After a fourth points-scoring finish in a row in Monaco, Carlos Sainz heads to Canada targeting another strong finish to add to his collection.

What do you like about Montreal?
Carlos Sainz: Montreal is one of my favourite cities to visit on the Grand Prix calendar. There are many good restaurants to visit, especially some great steakhouses, and I really enjoy it there! The entrance to the Paddock in Canada is unique as you have to walk on a floating bridge to cross the lake. It's a cool race weekend!

What's the circuit like to drive?
CS: It's certainly a different circuit, quite similar to Melbourne in a way, as it's a mix of a street and a permanent track. The circuit is usually dirty with leaves and even wildlife during the early parts of the weekend and that makes it a bit of a challenge to get up to speed. I quite like the section between turns four, five, six and seven. The walls are close and you have to find the rhythm through there to get it right and ride over the kerbs. Last but not least, you have the Wall of Champions, the final chicane, another legendary circuit corner on the calendar!

You must be pleased with four points-scoring finishes in a row?
CS: I think it's positive that we're looking competitive and scoring points at the past few races. It's important to keep scoring points and adding to the tally. Now it's about building on this consistency and placing ourselves higher inside the top ten. Bring on Canada and continuing this positive stride.