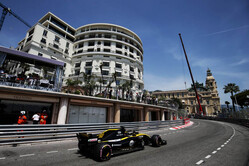 Renault Sport Formula One Team will start tomorrow's Monaco Grand Prix with Carlos Sainz inside the top ten. The Spaniard will line up in eighth position after another super-tight qualifying session around the streets of the Principality.

Nico Hulkenberg missed out on Q3 by just one tenth and starts a little further down the order in eleventh, with a free choice on tyres and flexibility on strategy for the 78-lap race.

Nico Hulkenberg: "So that was not exactly not the cleanest Quali, but we all feel we can have a good day tomorrow. I locked up a little coming into Turn 10 out of the tunnel and lost the time that would have got me through. But at least we have some flexibility with the strategy for tomorrow's race that can come into play."

Carlos Sainz: "It was a very tight one today. After Q1 we had to react and we changed a few things on the car to try and get closer to the 1:12 mark. We got closer still in the second session and then in Q3 we did a good job, taking eighth, even though the out lap in run two was not the best. Tomorrow will be a tough race: a one-stop strategy on the Hypersoft won't be easy with tyre degradation, so it might be one of the hardest Monaco races in recent seasons. The undercuts and overcuts will play a big part and so will traffic. We have some things to think about overnight but I feel very positive."

How would you sum up the team's Qualifying session today?
Alan Permane, Sporting Director: We have mixed feelings about today. Carlos pretty much got everything he could out of the session and the car. We were pretty happy with that; the times are very tight. Nico just didn't have a great session. If you look at what the car was capable of and what he thought was achievable, we could have been P6. It didn't quite work out, with some traffic and then a minor slip but that's Monaco and sometimes that's how things work out.

Does starting out of the top ten with Nico give you any advantage with the strategy?
AP: We have to work out whether it's an advantage! Being eleventh gives us some options to start on some different tyres and will be looking at that overnight to see where we need the flexibility.