Renault duo looks ahead to Monaco 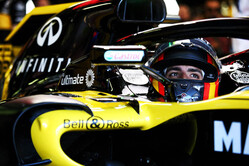 It was a case of being in the wrong place at the wrong time for Nico Hulkenberg in Spain, as he eyes up a better run on the streets of his hometown.

What makes the Monaco Grand Prix a standout race?
Nico Hulkenberg: Nothing compares to Monaco, there is no place like it. It's the highlight of the year and the race I most look forward to. It's just so unique and special in every aspect; the glitz, the glamour, the circuit itself, the whole vibe is amazing throughout the weekend. It's one of those tracks which give you a sensation of speed and, in turn, a real buzz.

What's it like to wrestle a Formula 1 car around the streets of Monaco?
NH: From a physical point of view, it's not the most demanding circuit, but it requires a lot of concentration, precision and discipline. It's not a high G-force track, as it's mainly low speed, but it's full on, a busy lap and means concentration levels have to be on point. Any error will put you in the wall and that means game over. You have to be confident as a driver in Monaco, and believe in your car. It's usually a thrilling race, anything can happen, even though overtaking is difficult. But that's the challenge, and I really love racing at Monaco.

How do you approach the weekend?
NH: You build that confidence up in stages, lap by lap, session by session. There isn't much point in getting over excited, or confident too quickly because you'll soon find yourself in the wall. Qualifying is where you need to peak and take those risks, getting closer to the barriers and on the limit. That's when you find that buzz and that excites me.

Is it refreshing to stay at home during the weekend?
NH: It's a nice change up to the normal routine. It feels a bit strange to go home every night and between sessions, but I like that and it puts me at ease a little bit. I quite enjoy going out on the scooter or biking around the track.

What's there to say about Spain?
NH: It was frustrating as we'd got on top of the car and I was charged-up to work my way up the order. My focus is now Monaco.

Carlos Sainz is aiming to make it three points scoring finishes in a row in Monaco, a track which requires a gentle and meticulous approach.

What do you like about racing in Monaco?
Carlos Sainz: It's always a good feeling going to Monaco, and that excitement ramps up to another level on the Grand Prix weekend. You can't drive around Monaco like you do at any other circuit. It's unique and requires a completely different approach to any other weekend. You are constantly aware of the walls and you have to keep concentration levels high on every corner of every lap through the weekend.

How does a Formula 1 driver approach the Monaco Grand Prix?
CS: Confidence in yourself, and in your car, is key to a successful weekend. You build that confidence up in little steps, all the way up to qualifying when you aim to be at 100%. Qualifying is crucial in Monaco, and it's usually very tense. I would say it's one of the toughest sessions of the whole season, if not the toughest and you need to carry that extra level of determination for it. When you nail your qualifying lap at this track, there isn't any feeling like it, it's amazing.

What else do you get up to in Monaco?
CS: Even away from the racing, it's a totally different weekend. For instance, we'll use a scooter to go from the hotel to the track, which is cool. It's a really unique weekend in every way. The glitz and glamour is unique, there are stunning sportscars everywhere and lots of impressive yachts in the harbour making the atmosphere a real thrill.

You must be pleased with back-to-back points-scoring finishes?
CS: Barcelona was another good result but it would be a huge mistake to lose focus. We're confident our approach is the correct one and we're making good progress. It's about continuing on this trend and keeping up the hard work. After Barcelona, the team climbed up to fourth in the Championship and the target is to consolidate that position in Monaco with more points.