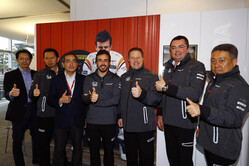 Should Sebastian Vettel convert pole position in to a victory today, it would mark Ferrari's 11th win at the circuit that bears the name of one of its favourite sons.

However, when one looks at the history of F1 in Canada, where the Grand Prix was held at Mosport in 1967, '69, from '71-'74 and '76-'77, and Mont-Tremblant in 1968 and 1970, victory would still leave the Maranello outfit trailing McLaren which has won the Canadian round of the world championship on 13 occasions.

However, while Ferrari can likely add to its tally today, the odds are very much against McLaren.

Having previously claimed, while partnered with Honda, that it had the best chassis, qualifying 14th and 15th, while the similarly powered Red Bulls and Renaults are all in the top nine, appears to suggests the Woking outfit was being more than a little ambitious.

Yet while the Woking outfit continues to struggle in Formula One, Zak Brown admits the company is looking further afield.

"We're seriously considering IndyCar, we have been doing due diligence for quite some time," he told reporters in Montreal.

"As stated before if we are going to get into other forms of motorsport we need to do it in a way that doesn't compromise our Formula One activities or we won't consider it," he added. "It needs to be commercially viable, something we feel we can be competitive in and fits our brand. It has to tick all those boxes.

"We are not done with our due diligence yet," he admitted, "but it is looking favourable so we'll take a decision in order to be prepared for 2019 sometime in the coming months."

In his bid to claim motorsport's Triple Crown, Fernando Alonso was allowed to contest the Indy 500 last year, the Spaniard giving an impressive performance and actually leading the legendary event until an engine failure.

While the Spaniard's future is unclear, other than his burning desire to claim the Triple Crown, a quest that will see him contest the Le Mans 24-Hours next weekend, one has to wonder, did his Indy 500 bid inspire McLaren's desire to return to IndyCar or was it the other way around, for increasingly it appears Alonso has the real power in Woking.