Following its one-two victory in the World Endurance Championship (WEC) season opener at Spa-Francorchamps, Toyota Gazoo Racing again set the pace today at Le Mans on the official test day, as Fernando Alonso who shares the #8 TS050 Hybrid with Sebastien Buemi and Kazuki Nakajima set the fastest lap of the day, 3:19.066.

That was 0.614secs quicker than the second-placed #3 Rebellion, while the #7 car of Mike Conway, Kamui Kobayashi and Jose María Lopez ended the test third.

In total the two TS050s completed 202 laps, 2,752km, on a day of trouble-free running despite three red flags and multiple safety car periods.

Today's test day is the only chance for teams to experience the 13.626km circuit before race week, making it a particularly important event as the 86th Le Mans 24 Hours approaches. 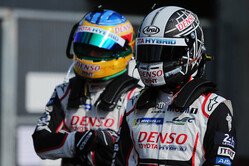 Both cars had a long list of items to test, including aerodynamic and mechanical set-ups, as well as hybrid recovery and boost settings.

{The circuit is made up partly of public roads so various specifications of Michelin tyre were evaluated in terms of performance and degradation on this unique track surface.

Alonso had the chance to experience the Circuit de la Sarthe for real at the wheel of a TS050 Hybrid for the first time, following several simulator sessions to prepare for his Le Mans debut. He took the wheel early in the morning session and went on to complete 40 laps, 545km, over the course of the day.

Most team members will stay at Le Mans for a shakedown test on the shorter Bugatti Circuit on Tuesday to finalise preparations prior to race week, when action begins on Wednesday 13 June with practice and first qualifying, however, Alonso has an appointment in Montreal next weekend where he will contest round seven of the Formula One World Championship.

"It was a very good day for us as a team," said the Spaniard. "We obviously prepared this test in the best way possible before the big race (on the weekend of 16/17 June). The car felt good from the first lap and everyone was happy straight away.

"Then it was about getting familiar with the circuit; I have been in the simulator and studied onboard laps from previous years but it's always different on the real track which feels perfect for these cars. It was an interesting day and a lot of fun."