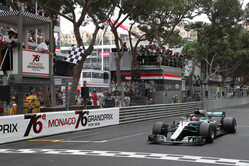 While the rest of us agonised along with Daniel Ricciardo, fearing that Lady Luck might desert him once again on the mean streets of Monaco, Lewis Hamilton and Fernando Alonso were thinking about all the other things they could be doing on a Sunday afternoon, both claiming that Monaco was the most boring race ever.

"Thank God that's over," said the Mercedes driver over the radio on the cool-down lap, "that was the most boring race I've ever participated in."

Speaking in the subsequent press conference he elaborated.

"Our car is very long and struggled with the graining," he told reporters. "But to go away from here after such a long race, it felt like the longest race I've ever done probably, it was quite a long race! I'm looking forward to the following races, hopefully they'll be more fun."

While Ricciardo kept radio chatter to the minimum, probably fearing that each new message would bring further bad news, Hamilton gave a lap by lap account of the condition of his tyres to his crew only to be told that everyone else was encountering the same issues.

"We were just cruising around from lap six, maybe... literally cruising," said the world champion. "So it wasn't really racing.

"I mean, Daniel did a great job today, so I'm super happy for him, but ultimately we were all turned down and just cruising around, making sure we get to the end. Which, I don't know if that was exciting for you guys to watch. If it is, no problem.

"Ultimately we knew coming here was going to be difficult for us," he admitted. "It was a much, much better weekend than we had last year. I think collectively we did a good job. I think maybe a couple more tenths in qualifying, maybe it would have been second place, but we would have struggled to stay ahead of Sebastian."

Hamilton's views were shared by another world champion, Fernando Alonso, who retired 52 laps into the race with a transmission issue while running 8th.

"I think we probably need to give something to the fans at the end of the race just to pay the ticket back a little," he added, a comment that will not go down well with F1 bosses.

This being the 65th Monaco Grand Prix, the basics of the circuit have changed little over those years. Indeed, Alonso believes it is the cars that are to blame.

"I think it's just Monaco, it's the way it is," he said. "I think it was quite boring without a safety car or anything. We just start in our qualifying position and we run until the chequered flag in that position."

Almost from the start, a number of drivers, including Hamilton asnd Nico Hulkenberg, complained about the overall pace which was being controlled by race-leader Daniel Ricciardo.

However, when it was subsequently learned that the Australian still managed to win, seeing off a few half-hearted efforts from Sebastian Vettel, despite being down around 25% down on power, many fans began to conclude that Hamilton and Alonso are right.