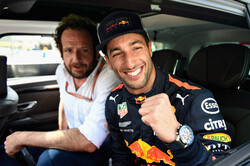 As expected, Red Bull topped the timesheets this morning, Daniel Ricciardo scoring a hat-trick having been quickest in all three session.

It would be unfair to saw "as expected" in terms of teammate Mas Verstappen's fate, the youngster crashing out in an incident eerily similar to the incident in 2016. Indeed, all that was missing back then was Carlos Sainz.

Up until that moment it was looking good for the Dutchman who is looking to open his 2018 win account. At that point he was setting the pace, but adding insult to injury as Verstappen headed back to the motorhome, and no doubt an icy look from Helmut Marko, Ricciardo went out and beat his best time by one-thousandth of a second.

The crew have worked throughout the break and hopefully Verstappen will take part in qualifying, the RB4 not as badly damaged as fist thought, certainly no need for a new gearbox.

Behind the Bulls, the Ferraris had the edge over the Mercedes pair while Brendon Hartley and Pierre Gasly finished a very impressive seventh and eighth.

Next up came three drivers who did well in out-pacing their teammate, Carlos Sainz, Sergey Sirotkin and Stoffel Vandoorne, each of who did a good job.

At this point might we say that Sirotkin is doing an impressive job at Williams - under the circumstances - and making a lot less noise than his teammate.

As was the case on Thursday, both Haas drivers were worryingly off the pace, keeping the Sauber duo company at the wrong end of the timesheets.

The big question this afternoon - other than whether Verstappen's car will be ready - is tyre strategy.

All the teams have thrown their eggs in the hypersoft basket this weekend. But, come Q2, as they look ahead to the race, do they stick with the pink-banded tyre knowing that it will mean an early pitstop, or do they go for the slower but far more durable ultrasoft or even the supersoft?

All will be revealed soon enough.

It goes without saying how important grid position is here, but before worrying about pole there is the little matter of Q1 which will see all 20 cars on track and the inevitable traffic issues.

Five minutes before the start of the session, work is still going ongoing on Verstappen's car. Tense times for the youngster and his team.

As Hamilton climbs into his car it is revealed that there appears to be an issue with Verstappen's gearbox.

Hartley heads out, followed by Gasly, Stroll, Leclerc, Grosjean and Magnussen as Q1 gets underway. Bottas is another early riser as within moments there are 17 drivers on track. All on hypers.

As Hulkenberg heads out, all but the Bulls are on track.

The times tumble, and following the first wave Vettel is quickest (13.165), ahead of Perez, Hamilton, Sirotkin, Alonso and Bottas.

Ricciardo heads out as Raikkonen posts 19.677, the Finn losing out badly due to traffic.

A 12.769 sees Ricciardo go quickest, the Australian subsequently demoted by Sirotkin who stops the clock at 12.706.

Red Bull confirms that Verstappen will need a change of gearbox and will therefore play no part in this session.

Having gone quickest (12.670), Raikkonen complains that he was blocked on his previous flyer by a Mercedes. Alonso goes second with a 12.698.

Vandoorne goes fifth and Perez sixth as it is revealed that the stewards have noted the incident in which Bottas appeared to impede Raikkonen.

PBs in the first two sectors see Hamilton go second (12.460) only for the Briton to be leapfrogged by Vettel moments later.

Raikkonen goes quickest in S1, the Finn having take pole here a year ago. A poor final sector however means he can only manage fourth (12.639).

"The lap was screwed," Vettel reports, adding that the traffic was "pretty messy".

As the clock counts down, Bottas a poor opening sector. In S2 however he posts a PB, finally crossing the line at 12.434 to go third.

Leclerc goes ninth with a 12.829 while teammate Ericsson can only manage 17th.

Grosjean is up to 11th but Magnussen fails to improve on 19th.

Leclerc is off at T1 resulting in a yellow flag which is bad news for those seeking to improve. Indeed, it means Hartley is unable to improve and therefore misses the cut, in addition he claa9ms he was impeded by a Force India. "He tried to put me in the wall," he says, a claim usually made by one Pink Panther anout the other.

We lose Hartley, Ericsson, Stroll, Magnussen and, of course, Verstappen.

"So that's Q1 done," says Pirelli. "Now onto the serious stuff. Last year's pole was 1:12.178, that record was already broken in FP1. So, we should see the fastest-ever laps of Monaco."

Bottas is among the first out for Q2, and like teammate Hamilton he is on the ultras. Everyone else is currently on the hypers.

No messing as Ricciardo shoots straight to the top of the board with an 11.353.

Vettel goes second with an 11.518, Ahead of Raikkonen, Perez and Alonso.

Vandoorne slots into sixth behind his teammate with a 12.440.

Both Mercedes drivers posts PBs in S1 but then lose a heap of pace in S2 before diving into the pits.

With the track to himself, Hulkenberg goes seventh (12.447), with a typically aggressive lap.

Understandably, the Mercedes pair switch to the hypersofts. They experimented with the ultras, but it was a gamble that failed.

As Alonso asks if he has the fuel for another lap, Ricciardo goes quickest in S1. However, the Australian has a poor second sector before another strong final sector. He raises the benchmark with an 11.278.

Sirotkin fails to improve on 12.521 and therefore fails to make the cut, while Hulkenberg also misses out.

Hearing that he failed to make the cut, Grosjean responds: "Ah, fudge!"