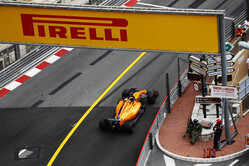 Daniel Ricciardo completed a Red Bull monopoly of the free practice sessions in Monaco, setting a new track record in FP2, with last year's pole time already beaten in FP1 thanks to the brand new P Zero Pink hypersoft. On its debut, the new tyre has resulted in times that are nearly one second per lap quicker than last year in FP2.

The street circuit has additionally been extensively resurfaced since last year, giving it more grip and a smoother surface, which has also helped to deliver faster lap times.

Mario Isola: "We've seen a lot more degradation on the softest compound here - the new Pink hypersoft making its debut here - than we have in previous years, exactly as expected with our new compound. Having said that, you really can't compare Monaco to anywhere else, which is why it was particularly important to collect as much relevant data as possible on the hypersoft today. We also saw some front-left graining, especially in the morning, which is also normal in Monaco. While the extra pace this year was clear with the track record broken today, a one-stop race on Sunday is still the most likely option due to the huge importance of track position at this race. Although Red Bull has been very strong today, again we've seen the top teams very closely matched."