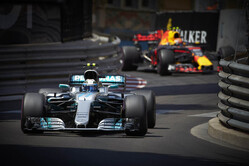 Fresh from its emphatic win at Barcelona, Mercedes is expecting an altogether tougher time on the streets of Monaco, a track that is much more likely to favour Red Bull and Ferrari.

Indeed, talking ahead of this week's race on a track where his team finished 7th and 14th last time around, Toto Wolff admitted he wasn't relishing returning to the Principality.

"Bloody worried," he replied when asked about this weekend's race. "We've seen in the last years that there were always tracks that suited us well, and some that we weren't perfect, for whatever reason.

"It's very difficult to undo the DNA of a car," he continued, "and Monaco, Budapest, Singapore, were all tracks where we underperformed - underperformed a lot - last year.

"It's a great challenge for us to come back this year, and tame the 'diva', it's not a diva this year, actually, she's behaving better," he added. "It's a difficult one. Why our car doesn't like to be quick around the corners in Monaco, we haven't found out yet.

"We don't head into the weekend as favourites," he admitted, "they are Red Bull and Ferrari. Red Bull are strong in the slow-speed corners and where straight line speed is less important, while Ferrari dominated last year.

"Our job is to deliver a smooth practice programme, apply our learning from recent races and maximise the potential of the car, whatever that proves to be.

"We are now starting the heart of the season, with seven races in the next ten weekends. We will race on a broad range of circuits before the summer break, with races coming thick and fast. This will test the team to its limits and any weaknesses will be harshly punished in the points. We are clear-sighted about the challenge ahead of us and determined to prevail."