How to master Monaco 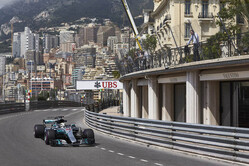 It's the race that everyone wants to win. But what are the key ingredients that a driver and team needs to be successful around the streets of Monte Carlo?

How important is the driver?
Very important. The Circuit de Monaco is a driver's track. Its tight layout and close walls mean that there is no margin for error and every mistake is punished. Braking as little as two metres too late can ruin the entire weekend. If you're lucky, you end up on an escape road. If you're unlucky, the car is wrecked. To be successful in Monaco, the driver needs to find a perfect rhythm.

What can the team do to help the driver get into the rhythm?
The driver needs to be able to trust the car from the beginning, to then carefully approach the ideal lap. So the team tries to hit the ground running by providing a car that inspires confidence from the moment the driver first leaves the pits on Thursday. At other races, the team might bring new items to be tested on a Friday, but in Monaco every minute of the Free Practice sessions is devoted to finding the ideal car set-up. The way the team approaches the set-up process also differs from other races. The front ride height, for example, is usually a little higher on the first run in Monaco than it would be at other races. This makes it easier for the driver to choose his braking points as it limits the risk of heavy bottoming. The front ride height is then lowered more and more over the course of the sessions as the driver gains confidence once he's found where the bumps in the track are. Making the most out of the practice sessions is particularly important because he can easily complete an entire session and only get a handful of clear laps, where he's not in traffic. It's up to the team to plan accordingly and find a good moment to leave the garage, enabling the driver to get in consistent laps. It also means that the driver needs to manage his position on track on Thursday and Saturday. Four or five seconds to the car in front is usually enough room in Monaco whereas a three-second gap makes the car in front a hindrance.

What else do the drivers need to be successful in Monaco?
While finding the rhythm is extremely important in Monte Carlo, it is not the only key to success. Another one is concentration. Monaco sees around 80 significant changes of steering direction and 50 gear changes per lap. When you add the constant throttle and brake paddle inputs, you can see just how hard the drivers are having to work on every one of the race's 78 laps. If one considers wide open throttle (WOT) time as a moment where the driver has a chance to "have a break", then Monaco does not offer a lot of time to rest. WOT time in Monaco is about 24 percent of the entire lap time, compared to over 50 percent in Barcelona. And even those 24 percent aren't actually "time to relax", as for the most part the WOT sections aren't straight in Monte Carlo. So while Monaco has both the shortest lap (3.337 km) and the shortest race distance (260.286 km) on the F1 calendar, it still requires the drivers to be laser-focused the entire time.

How important is Qualifying in Monaco?
Track position is everything in Monaco because overtaking is so difficult, making it the most important qualifying session on the calendar. So, the drivers need to get their qualifying lap absolutely perfect. That's no easy feat - but when it does happen, it will be remembered for years to come. 30 years after his legendary drive, Ayrton Senna's 1988 pole lap still brings goose bumps to many Formula One fans.

Does the track create any specific challenges?
The track layout is so different from any other Formula One circuit, the teams bring components specifically for Monaco. The famous Fairmont hairpin - you know, the one that everyone, including us, still calls Loews hairpin - is the tightest turn of the year and requires more steering lock than any other corner. Compared to the hairpin corner in Montreal (Turn 10), an extra 40 percent of lock is needed for Loews Hairpin (Turn 6). The team will therefore bring a special front suspension to Monaco, allowing for a bigger road wheel angle. This means that the driver doesn't have to turn the steering wheel multiple times going into the corner. Loews Hairpin is also the slowest corner of the calendar with a minimum speed of 50 km/h.

The W09 EQ Power+ is the car with the longest wheelbase on the grid. Does that create an additional challenge on a narrow and winding course like Monaco?
The long wheelbase provides us with more surface area from which to extract downforce and gives the team a good reward throughout an entire season; especially since it is downforce acquired at a very modest drag penalty. At a slower, twistier circuit at the extremes like Monaco the team get the least benefit from a long wheelbase car. You still get all the downforce associated with the extra surface area, but a longer wheelbase car needs more steering angle on the front wheels to get the car turned. For that reason, the team is bringing the special front suspension to Monaco so that the choice of line through Loews Hairpin is not limited. In theory, if one compared two cars, which were identical in all respects apart from their wheelbase, then the shorter wheelbase that is more commonly found on the grid would be a faster around Monaco by less than a tenth of a second. However, this is not a real world comparison, because in practice you would lose downforce if you went from the long wheelbase car to the average of the grid, and the net result would be a slower car even at Monaco.

Are there any specific aerodynamic challenges?
Monaco is the first track in 2018 to feature high downforce aero kits. Back in the old days of unrestricted wind tunnel testing, teams would build an aerodynamic package specifically for Monaco. Today, however, they use the maximum downforce package in Hungary and Singapore as well. Monaco is a low-speed circuit with short straights; the team measured a top speed of 295 km/h at the exit of the tunnel before braking into the Nouvelle Chicane (Turn 10) in 2017. Lots of slow speed corners and short straights combine to place a high premium on downforce while being less penalizing than other tracks on the high drag that this downforce generates. The limited speeds create a challenge in another area though, as the air flow over the radiators is also limited, making the cooling of the car tricky. So, the team needs to open up the bodywork for additional cooling, looking for the perfect balance between performance and reliability.

Monaco is a street circuit. What does that mean for the track surface?
Historically, Monaco used to be a very bumpy track, made up of a patchwork of tarmac and creating quite a challenge for the ride of the car. But after numerous rounds of resurfacing various bits of the track, undulations are no longer so much of an issue. There's an exception to every rule, however, and bumps like the one on the left-hand side going down to Mirabeau (Turn 5) are best avoided. Monaco is also famously known for being a track that evolves immensely over the course of the weekend - although experts are not quite sure whether that's down to the extra rubber on the ground during the day or the sticky blend of beer and champagne that's poured on the track each evening, especially in sector 3... Between the start of FP1 on Thursday and the end of qualifying on Sunday, the track improved by more than 2.5 seconds in 2017. In previous years, the improvement was even higher, making the track faster by up to four seconds.

What implications does the track layout have for the tyres?
Monaco will be the first event to feature the new HyperSoft compound tyre and it will be interesting to see what this adds to the mix. The compound has the potential of becoming a proper "Monaco tyre" - a compound that works perfectly on the very unique layout of the track with its slow corners, many braking zones and short straights in between. Owing to the slow turns, the tyres are subjected to very low cornering energy, meaning that the compounds typically last much longer than they would on any other circuit. And since overtaking is so difficult in Monaco, even a driver under pressure can usually manage his tyres without creating a big risk of being overtaken.