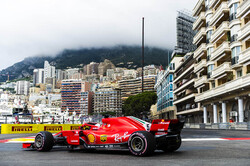 Daniel Ricciardo led a Red Bull 1-2 this morning in a session that for the most part lived up to expectations.

The engine advantage of its rivals pretty much negated here, Red Bull came to Monaco almost favourites, with Mercedes, in particular, likely to struggle.

As it happens, Lewis Hamilton was third quickest, just 0.354s off the pace, while both Ferraris were almost a second off the pace.

Ricciardo's best time of 1:12.126 was quicker than last year's pole time of 1:12.178 and consequently it is expected that tomorrow afternoon we could see the bar lowered to the mid-tens. Much of this is down to the introduction of the new hypersoft tyres, which was the preferred tyre for most drivers, a number of whom didn't run on any other compound.

A number of drivers had close encounters with the barriers earlier, but there were no serious incidents. Max Verstappen was summoned by the stewards after he reversed on to the track at T1 after a lock-up but no further action will be taken.

Carlos Sainz was sixth quickest, ahead of Bottas, Perez, Grosjean and Sirotkin, while Kevin Magnussen completed just 7 laps as a result of a fuel injection issue.

Both McLaren drivers suffered issues that cost them track time so consequently we can expect to see the Woking duo, and their Haas counterparts, looking to get in as much running as possible this afternoon.

As expected, when the lights go green, Magnussen is first out. The Dane is followed by Grosjean, Leclerc, Ericsson and Perez.

Magnussen gets proceedings underway with a 19.475, but teammate Grosjean responds with a 16.164, The Frenchman is on ultras while the Dane is on supers.

As Vettel begins his first flying lap, Perez goes second with a 15.339. Moments later the Mexican is demoted when Vettel posts 14.413.

A 13.709 sees Hartley go top, the Kiwis quickest in the first and final sectors.

PBs in all three sectors see Hulkenberg go third (14.552), only to see him demoted when Raikkonen improves to third with a 14.050.As Vettel goes quickest (13.250), Hulkenberg has a big lock up heading into Mirabeau.

A 14.083 sees Gasly go fourth, the Frenchman, like most of the leading drivers, on hypers, the exceptions being the Ferrari duo.

Vettel consolidates his top spot with a 13.180.

Fifteen minutes into the session Hamilton heads out. Shortly after he is joined by Bottas and Verstappen. The Briton is on the supersoft rubber, his teammate on ultras.

"While Monaco is one of the most tricky races for the drivers, it's one of the easiest for the strategists," says Pirelli. "Should be a straightforward one-stopper still, but the hypersoft probably means that there's a narrower pit window than there used to be."

Verstappen, on the hypers, heads straight to the top of the timing sheets, the youngster banging in a 12.468.

Ricciardo finally heads out, after twenty minutes of running he is the only driver still to post a time.

Going quickest in all three sectors, Verstappen raises the bar with a 12.071.

Ricciardo posts 13.200 to go third as his teammate looks to do another hot lap.

The session is red flagged as race control reveals that track repairs are needed between Turns 4 and 5. Said track repair understood to be a drain cover.

After around 13 minutes the all-clear is given and the Toro Rossos lead the way. Soon all but the Mercedes pair are on track.

"I touched the outside wall," reveals Hartley, the Kiwi confirming this incident was at T1. He is told to slow as his team assesses the damage, if any.

"We're not confident what he's up to so let him though," Verstappen is warned of Sirotkin's impending arrival.

A 12.670 sees Ricciardo go second as Vettel complains of traffic. "They're all back up in front, Alonso is so slow," he warns.

Raikkonen is equally unhappy, though his language is a little more colourful. The Finn particularly miffed at Sirotkin. "It's the same ******* Williams every time," he says.

"Smart ass drove into my front wing," says Verstappen of Grosjean as they have a near miss at the hairpin.

Nonetheless, another improvement for the Dutchman who raises the bar with a 12.035.

As Ocon complains of traffic, the Force India driver is advised that he had the biggest gap of anyone on circuit; "so I can't help you any more mate", he is told.

With 35 minutes remaining, and attention about to focus to race sims, it's: Verstappen, Vettel, Ricciardo, Hamilton, Raikkonen, Hulkenberg, Sainz, Hartley, Bottas and Perez. The McLaren pair are currently 19th and 20th.

"Another on Kimi?" Raikkonen is asked. "Yeh, I'll try," he replies. "Traffic, traffic everywhere, it's the same all the time."

Almost as one, the McLaren pair improve to 13th (Alonso) and 14th. Vandoorne subsequently improves to 12 with a 13.382, to one-thousandth, exactly the same time as Ocon.

A 13.205 sees Alonso improve to 9th, just behind countryman Sainz.

Ricciardo heads out on a fresh set of hypers, closing to within 0.018s of his teammate.

As Ricciardo fails to improve, Verstappen heads out on used hypers.

As Vettel has a big lock-up in Rascasse, both Haas cars are back in their respective garages as the American outfit's difficult weekend continues.

Though only quickest in S2, Ricciardo bangs in an 11.841 to go quickest.

"You've got Bottas 12s behind you, also on high fuel," Hulkenberg is told. "Not my problem," comes the response.

"Getting to close to Verstappen," warns Vettel, the German told to ease off and create a gap.

As McLaren send Alonso out on hypersofts and Vandoorne on supers, Sainz complains of a strange smell in his car. "It's like brakes I think," he says.

"Garage time up!" declares Haas. "Grosjean out for a long stint on his previous set of hypersofts. Magnussen to follow imminently, used hypersofts also."

Hamilton currently on supers while Bottas is on ultras.

Ricciardo and Verstappen lapping at a similar pace while Vettel seems next up ahead of Hamilton.

"Again, no point in looking too closely at these times as the track will evolve," says Pirelli. "But we're seeing that Red Bull is living up to its reputation as pre Monaco favourite. If history is anything to go by, still plenty to come from Mercedes."

"I've learned everything from this tyre," snaps Raikkonen, who is subsequently switched to the ultrasoft.

Sainz is shown clipping the wall, the Spaniard immediately heading back to the pits.

Asked about his tyres, Ricciardo reports a "bit of deg" but nothing else.

"I can't drive anymore," moans Stroll, "my knees are crushed."