Vettel: No issue with Leclerc as Ferrari teammate 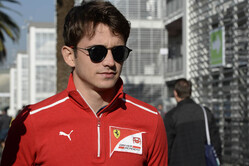 Despite a somewhat erratic start to his season, Charles Leclerc appears to have settled down, scoring points finishes in a car that Sebastian Vettel admits doesn't belong there.

Whether Ferrari seeks to move its young protege to Haas for his second season or promote him straight to its own team remains to be seen, but Sebastian Vettel insists he doesn't have a problem with it.

Asked if he expects the Monegasque to be his teammate next year, the German said: "I don't know. I'm not signing who is sitting next to me. Probably ask Maurizio, but I don't see why not.

"Obviously, he has more years than all of us here if you look at the passport," he added. "The races he has had so far, he has used his opportunities, scored points in a car that doesn't belong in the points. He's doing everything that he can at the moment."

With Lewis Hamilton out of contract at the end of the year, it was obvious that Vettel would be asked if he would welcome the Briton into the Maranello fold.

"I wouldn't mind," smiled the German. "To be completely honest, I'm very happy with the relationship I have with Kimi.

"Plus we just spoke about Charles," he continued. "You never know what will happen.

"I'm pretty sure Lewis's priority lies with Mercedes. Everything else will be a big surprise. But you never know. We'll see. Maybe one day we'll both go somewhere else as we're old or whatever. For me, it doesn't really matter. I'm happy to be where I am for the time that everyone knows. Then we'll see what happens."

Hamilton seemed equally unconcerned at who he might find himself partnering in the future.

"I'm down to race whoever," said the Briton. "I'm racing against him in a pretty competitive car which is always exciting.

"For any driver you want to go against the best. You've seen in history it can often be difficult when it's two incredibly strong drivers within a team. It seems to kind of work with him and Kimi. But if you really look at it, you can say Kimi can't be too happy because there are some scenarios that don't work out for him. It's always difficult.

"I like racing against the best drivers," he continued. "Racing against Fernando, against Jenson and some of the top drivers I have raced against, it brings the good and bad out of you. It pushes you to the limit."

Referring to his current teammate, Valtteri Bottas, who has taken a significant step forward this year, even if Lady Luck is not working in his favour, Hamilton said: "Valtteri is driving well and pushing me to the limit. There is a great harmony in the team. There is respect when one does better than the other. It really depends on the characters you have.

"I don't anticipate that we will be driving together in one team, unless we do Le Mans together one day," he said of himself and Vettel, "which we would probably just murder, wouldn't we?"