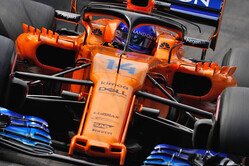 The team maximised its track time in FP1 - despite a brief red flag stoppage - to complete a productive session, testing various components and conducting a number of set-up changes while also bedding in new power unit upgrades.

The second session began with a continuation of the morning's programme, before moving towards longer runs with higher fuel. Stoffel tagged the wall at Turn Nine mid-way through the session, and brought the car to a stop on the track to avoid further damage to the floor. While the incident damaged his right-hand suspension, the team is confident the appropriate repairs can be made before tomorrow's sessions without any concerns.

Fernando Alonso: "It felt quite positive today. The car felt good straight away from FP1, and then we concentrated a little bit more on long runs and set-up in FP2, and I think we're happy. The car seems competitive here, now we need to deliver the result tomorrow in qualifying.

"On this circuit, you need to prioritise race pace, because you can overtake here so you need to be strong on Sunday. It's not worth putting all your efforts in on Saturday because there are no points in qualifying, but I think Q3 is possible tomorrow.

"We didn't have any big issues with the balance - we hardly touched the set-up, we just did some aero tests with the new parts we brought out here and we will now sit down, analyse the data and optimise the car for tomorrow.

"I tested the Hypersoft only in FP1 and it's difficult to say how it really is, but maybe it's a little bit better than expected, as the graining so far is not too bad. It's definitely the quickest tyre over one lap.

"The race will be interesting with some people going for one stop and some for two using the Hypersoft, and that opens a window to creativity, so let's see if we can optimise that."

Stoffel Vandoorne: "It's actually been a reasonable day today. I had an unfortunate touch with the wall in FP2 which cut our day a little bit short, but in general it's been a positive day. We were quite competitive in FP1, and in FP2 we were looking pretty good as well. We didn't really run the Hypersoft in FP2. Looking at all that, I think it's been a good day and I'm looking forward to tomorrow.

"The balance was a bit up and down for me as we tried a lot across both cars today, which was very good learning from the new bits we have here. Tomorrow we'll put everything in the right spec and I feel confident we'll be in good shape.

"This track is always a bit of a compromise: there are a lot of straight lines and a lot of tight chicanes, and you really need to be able to position the car well. There's always a balance to strike with the set-up, and we have to see what the best is for the race.

"When I hit the wall it wasn't because anything was out of control, I was just a little bit too ambitious. I clipped the wall and unfortunately it caused a puncture. Despite that, the feeling today in the car was positive and we did some decent laps."

Eric Boullier, Racing Director: "Although our running this afternoon was cut prematurely short on Stoffel's side of the garage when he tagged the wall in FP2, we can be satisfied with the work we've completed today to test a number of new configurations on both our cars in today's sessions.

"We tested various set-ups and components on both cars in the morning session, and in the afternoon turned our attention to higher-fuel running. The Circuit Gilles-Villeneuve offers fairly unique characteristics for our engineers to tune into, and finding the sweet-spot is a tricky compromise between speed and traction.

"We've amassed a good amount of information and learning about the track and our cars' behaviour here today, complete with analysis of our power unit upgrades which we plan to put to good use tomorrow in qualifying. The damage on Stoffel's car isn't serious enough to affect tomorrow's programme, however even with a smooth day's running we know that the competition will be tough. We'll be pushing hard, as usual, to maximise everything we have at our disposal."