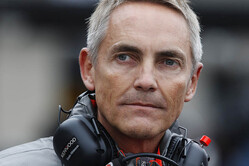 All that remains in order for Alonso to secure the Triple Crown is to win the Indy 500, and with Zak Brown aiming to take McLaren into IndyCar as early as next year it doesn't take a genius to join the dots.

Yet even if the Spaniard hadn't won Le Mans his future in F1 is surely in doubt, not wanted by any of the big teams he faces a future where the very best he can hope for is the crumbs from the table.

However, the Spaniard's future is of great concern also to his colleagues at McLaren, many of whom fear that his departure will be another sign of the legendary outfit's demise.

Currently 5th in the team standings, over the next three weekends the Woking outfit is likely to lose further ground to Renault, while Force India, Toro Rosso and Haas seek to close in, the fact that the multi-champions have failed to score points in the last two races hardly inspiring confidence.

Though Zak Brown and Eric Boullier have recently defended their positions, former boss Martin Whitmarsh talks of revolt in the air in Woking.

The Daily Mail claims that "disgruntled staff" at Woking have formed a "delegation" and intend to enlist Whitmarsh in a bid to turns the ailing team's fortunes around.

"Enough is enough," a source is quoted as telling the tabloid. "A delegation is being pulled together."

While some might dismiss the story simply because the Daily Mail is the source, it should be pointed out that this is not the first time in the last year that tales of unrest at Woking have emerged, with Pitpass having been contacted by several current employees totally disillusioned by the direction in which the team is heading.

According to the Mail, Eric Boullier's post-Canada debrief at the factory was not well received leaving a number of staff "furious".

In the last couple of years the team has seen the departure of Ron Dennis and the arrival of Zak Brown. The partnership with Honda was terminated just as the Japanese manufacturer appeared to be coming good, while the switch to Renault has demonstrated that the McLaren chassis isn't nearly as good as the team had been claiming.

The switch to a historic livery doesn't hide the fact that the team is desperately lacking in serious sponsorship, while Fernando Alonso, be it his IndyCar or Le Mans exploits, or the team's promotion of his leisurewear company, appears to have been given free rein to do as he wishes.

Meanwhile, as those in Woking want to return their team to its rightful place - as one of F1's greats - under Brown the company appears to be diluting its potential as it seeks to head into IndyCar and Brown even hinting at an LMP1 programme.

While some will argue that under Whitmarsh's leadership the team didn't exactly flourish, some still clearly see him as a potential saviour.

"People at McLaren said they would send me a letter about the situation," Whitmarsh tells the Mail, referring to an approach made over 18 months ago, not long after Brown took control.

"I told them not to send it to me, but to Mansour," he adds, referring to shareholder Mansour Ojjeh, who remains a close personal friend.

Seen in the McLaren garage over the Spanish Grand Prix weekend, Whitmarsh reveals that he did voice his opinion.

"I piled in a little bit," he admits. "I love the team and I am desperately sad to see what it has become.

"It needs a big change of approach. There is too much politics between the main figures. I think a number of them have to go. I have explained my view to Mansour and it is for the shareholders to decide what to do.

"The team used to be all about winning in Formula One. Now they are looking at other avenues... going to race in IndyCar and Le Mans, for example. They are great things in themselves, but McLaren going in that direction, rather than making grand prix racing their sole priority, makes me shudder.

"I live locally and I bump into friends who work at McLaren. They are disappointed with what is happening and remonstrate with me."

Whitmarsh admits that the firing of Tim Goss was particularly galling.

"Tim's departure pitched me over the edge," he says. "Tim has a fantastic intellect, and is a hard-working, non-political, value-adding member of the team. He was scapegoated. He may not have all the answers, but he would work on a solution from first principles."

Rather than help the team, Alonso's Le Mans victory is likely to be just another nail in the McLaren coffin as far as some are concerned.

Aware of the growing unrest in Woking, Whitmarsh offers his former colleagues a little hope.

"If a delegation showed up at my door, I wouldn't turn them away," he said. "They know where I am."