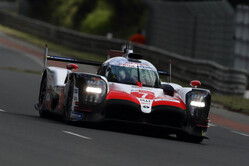 Kazuki Nakajima claimed provisional pole for Toyota at Le Mans on Wednesday, out-pacing the team's sister car by just 0.107s - ironically the gap that covered the four leading drivers in FP3 in Canada at the weekend.

With the rules dictating that all drivers must complete 5 laps at night before being allowed to participate in this weekend's race, Fernando Alonso headed out at one the busiest periods.

With only one team contesting the top LMP1 class in the wake of Porsche's withdrawal, this weekend's race is Toyota's to lose as it seeks to become only the second ever Japanese manufacturer to win the French classic.

Jenson Button, who like Alonso is making his Le Mans debut, posted 3:21.408 in the second SMP Racing BR1 to claim provisional seventh.

There are two further sessions today (Thursday), but with rain forecast it could well be that Wednesday's times stand.