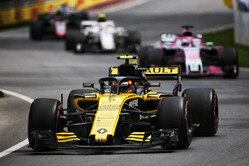 The ten points scored at the Circuit Gilles Villeneuve equals the team's score in the Azerbaijan Grand Prix last month. This further bolsters the team's position of fourth in the Constructors' Championship as it is now on 56 points, just one point shy of its entire season points tally in 2017.

Nico Hulkenberg: "We executed the race well today and it was a good effort from everyone. Ten points in the Constructors' Championship is positive for us and we've extended our lead in fourth ahead of our rivals. It was a close battle today, I lost a position at the start, but I managed to get the overcut on Ocon by going two laps longer, as he was holding me up a little bit on that first stint. From then, it was about managing the tyres, which was quite tough as degradation was kicking in towards the end."

Carlos Sainz: "It was a good day for the team and ten points for the Constructors' Championship. It's another step forward and we had a good race pace compared to the rest of the midfield. We wanted to bring both cars home in the points and we'll certainly enjoy the result even though it was a largely quiet race for us! The team did a solid job yesterday and again today to jump the Force India. We thought we were going to have a lot more degradation and in the end we came back with good tyre management."

Cyril Abiteboul, Team Principal: "Today was a highly positive result with Nico and Carlos achieving the best finishes possible with the current pace of the Renault R.S.18 relative to those ahead of us. We enjoyed good judgement from the pit wall which enabled a strategy to recover from a not so perfect start. The ten points achieved today are very healthy for the Constructors' Championship. The entire weekend illustrated the beneficial teamwork between Viry and Enstone. We delivered upgrades to the Power Unit and chassis and these worked extremely well. We did have difficult moments on Friday and Saturday but the team has done an amazing job of recovering from that, including changing a turbo one hour before qualifying with all hands on deck in a magnificent display of teamwork. We now aim to build on this result by looking at what can be done to reduce the performance deficit to the top three teams."