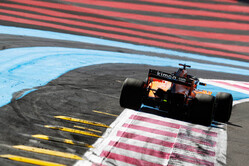 Stoffel Vandoorne finished today in 13th after running Fernando close until the very end of the session.

Blustery winds, a pair of red-flag stoppages, and a couple of harmless gyrations all added spice to proceedings, but failed to hamper our busy test and evaluation programme, which was concluded satisfactorily.

Fernando Alonso: "Conditions were a bit tricky today - the wind played a big role in FP1, then changed direction this afternoon. The track is close to the seas, so we'll get changeable winds all the time.

"It was a fairly regular Friday, spent trying to understand and learn the circuit and develop a good base set-up.

"The track is good; very smooth, the new asphalt is very grippy, which is always a help for a driver. I quite like the last sector, Turns 11 and 12 are quite challenging, so we may well see some action there on Sunday. There might also be a possibility to alter your racing line to follow the car ahead a little bit more closely. Let's see if that results in some overtaking during the race.

"Due to the VSC at the end of FP2, we're still missing a little bit of long-run info about the tyres - but we'll try to recover that in tomorrow's practice. There are a couple of set-up possibilities still to explore tomorrow, so hopefully we'll be a bit more competitive."

Stoffel Vandoorne: "To be honest, the first day back at Ricard was a bit of a mixed bag for us.

"The winds made it tricky for everyone - we saw a lot of cars spinning off - but we also weren't very competitive in FP1. Then I had a much better feeling with the car this afternoon - the wind direction changed, and everything came together a little bit more for us.

"Our tyre degradation also looked okay; there was a lot of track evolution during FP2, which was probably related to the temperatures and the cars being able to put a bit of rubber down on the track. That's something I think we'll see continue to develop across the weekend.

Eric Boullier: "It's great to be back at Paul Ricard for the return of the French Grand Prix. And it's fantastic to see so many enthusiastic spectators already lining the tracks - despite the difficulties that many of them faced driving in to the circuit this morning. Let's hope the organisers can iron out those problems for the rest of the meeting.

"For the team, this was always going to be a day spent focusing on testing and correlation as we work to improve our understanding and knowledge of the MCL33. That work was positive, and both drivers reported that they were satisfied with the car and its balance.

"Clearly, we've got plenty of work to do this evening, and over the forthcoming races, to close the gap to the front, but it's satisfying to be making steady, reliable progress.

"This has been a solid start to a busy and important weekend."