Boullier defends his role at McLaren 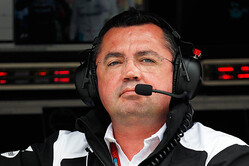 At a time he should have been celebrating the return of F1 to his homeland, McLaren team boss Eric Boullier instead found himself defending his position with the team, while, in an almost surreal moment, laughing off talk of Freddo-gate at today's press conference.

Last weekend, the Mail on Sunday quoted former team boss Martin Whitmarsh as saying that he is aware of unrest within the team and that workers are looking to form a delegation fearing the direction the team is taking.

Then, ahead of this weekend's French Grand Prix, a race McLaren has won three times at this track, there were further claims as Sports Mail reported contact with an employee at Woking who described the atmosphere as "toxic" and their boss as "clueless".

Giving the report a surreal air was the claim that in reward for "sweating blood" for the team, employees were given 25p Freddo chocolate bars.

Referring to the "clueless" management, the source identified them to Sports Mail as; "Boullier, Matt Morris, chief engineer, Simon Roberts, chief operating officer, and David Probyn, operations director." Indeed, the article was accompanied by a picture of Morris and Probyn - along with two Renault engineers - eating their Freddos.

Asked today if there is a toxic atmosphere within the team, Boullier replied: "No, I think at this level of responsibility we are all obviously working for the company, we are all making sure we take our responsibilities.

"There have been a couple of stories about some chocolate-gate, I think in the media today which was a bit funny to read," he continued, "and again, it was good because actually we have tonnes of email from people saying 'this is a joke'... so maybe it's a couple of people grumpy, which in any organisation you have some people who agree or disagree when there has been maybe miscommunication.

"I don't know what is the problem of these people and I think we have invited them to come and see us to understand what their problems are, other than obviously talking through the back doors, y'know?"

Asked if McLaren would seek to identify and discipline the individual who had spoken to the media, the Frenchman said: "This is obviously an internal matter, so we need to discuss what we need to see internally, what's going… why that individual is unhappy.

"When you have, obviously 800 people… we have a lot of support from the workforce and from the engineering. I think it's just a matter of a couple of people who are grumpy. Actually, in some way it's maybe good for us because we have a lot of feedback and good feedback."

And asked if he would resign, he added: "Obviously, we are all responsible for the car performance. No, I will not resign, to answer your question.

"I've got my twentieth year now in racing, I've won races and championships with every team I've managed before, including Formula One, so this is some record that you cannot take away from me. So I think we're on a journey.

"We are not where we want to be, we are not happy with where we are," he admitted, "but with the journey, with the new Renault engine partner, and obviously we have a good team of people, we just need to make sure we are finding the issues with the car and correct them.

"We know where the issues with the car are, and make sure… when you build a car, when you believe in a concept, you have to develop the concept and make sure you correct if for the next one.

"It's true that this time last year we had no points at all, so obviously we are now in the fight for fourth with Renault and once again, we would prefer to be comfortably fourth, which was one of the targets we had assigned to ourselves.

"The car this year is obviously not working exactly like how we expect to be but we are still using this as an experimental experience, especially like this morning, for example, a lot of new parts on the car. We want to learn from this car and learn as well working with Renault – because it's a different partner from last year who we worked with for some years. We have something new to learn; some of the technical options we have not explored yet."