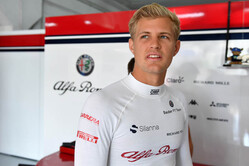 Marcus Ericsson will miss today's second practice session after his team was unable to repair his car in time.

With around six minutes of this morning's opening session remaining, the Swede lost the rear end of his Sauber and spun off at T11 sideways, subsequently hitting the safety barriers.

Shortly after, flames were seen leaping from the rear of the car. However, due to the fact his mirrors had been knocked off in the initial impact the driver was unaware of the fire until warned by his team over the radio.

The session was red-flagged following the incident and never re-started, and while the Sauber crew worked throughout the break it was eventually decided to change the chassis, such was the damage after the wiring loom got burned.

At the time of the incident, Ericsson was 14th on the timesheets just behind his Sauber teammate, Charles Leclerc, who himself had two spins over the course of the session.