How teams approach the challenge of a new track 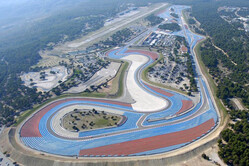 This weekend marks the return of the French Grand Prix at Paul Ricard, a circuit that has changed considerably since F1 last raced there in 1990. The teams don't find themselves heading to all-new venues very often. So, how did the team approach this rare occurrence?

The first step in preparing for the French GP was to generate accurate maps of Paul Ricard, which features a 3.63 mile (5.842km) lap (made up of 15 corners, six left and nine right). The simplest way to create these is from engineering drawings of the circuit, knowing the kerbs and the topography of it. However, most teams these days will try to use laser-generated Lidar (Light Detection and Ranging) maps, which are even more accurate.

In addition to the high accuracy, Lidar maps offer another advantage: they contain all the visual features of the area. They will therefore be used for the Driver-In-Loop (DIL) simulator because they give the drivers the visual recognition to match what they see in reality.

The teams also need accurate maps for its other simulations tools, which gather data and churn through the numbers, giving an initial direction on how to approach the weekend. For a well-known track, those simulations would also rely on historical car data; for a new track, however, the racing line for the simulations will be derived from the DIL laps.

F1 teams don't really approach a new track by saying 'this is a heavy braking circuit' or 'this is a long-straight track'. Instead, they sweep through a lot of different settings and set-ups in the simulator to understand the most critical points - one of which is the wing level that is chosen. So, they'll run lots of laps in the simulator with different rear wing levels, balancing that on the front wing and seeing which is fastest and which is slowest.

Because of the chicane on the back straight, the straights themselves aren't particularly long at Paul Ricard. The drivers also spend a reasonable amount of time cornering; in fact, Turn 3 to Turn 7 and Turn 10 to Turn 15 are almost constant cornering. Both the relatively short straights and the amount of cornering put the circuit on the upper end of the downforce level.

So where do the simulations leave us in terms of numbers? Mercedes is expecting 46 gear changes per lap, with drivers being at full throttle for an anticipated 58% of the lap and 70% of the lap distance. This is helped by the fact that Turn 10 and Turn 13 are predicted to be taken flat-out. Turn 11 will see the drivers pull the highest G-Forces, experiencing up to 4.1G at that corner. Top speeds are forecast to be around 201 mph (325km/h).

Teams will also try and find out where their car is on brake duty, so they can decide how much brake cooling to put on the car with the start set-up. Mercedes simulations lead them to expect brake energy to be low in France.

The bumpiness of the track is also significant for simulations as it determines the ride height of the car. The more undulations there are, the higher the need for softness and compliance in the car, which will come at the expense of aerodynamic performance.

Paul Ricard was recently resurfaced, so the tarmac should be very smooth and feature few bumps. But, that's something the teams will investigate and re-evaluate when they arrive at the circuit. New tarmacs are typically darker in colour, so they therefore get very hot in the sun. Consequently, the teams have to look at the ambient temperatures at that time of the year to understand these sorts of elements.

There are however, some elements that the teams can't simulate so well...

Car balance - trying to understand where the drivers are going to have understeer and oversteer - is usually trickier to simulate. That's because the balance of the car has a lot to do with tyre temperatures, which in turn depend on the duty they are seeing in each corner as well as track and ambient temperatures.

Also, because simulator tools won't give exact answers when it comes to car balance questions, the teams will rely on experience and - at a new track like Paul Ricard - a bit of intuition as well. Something a team can do though, is see what similarities a track like Paul Ricard shares with other venues on the calendar and that can help when it comes to aero balance and mechanical balance set-ups.

For example, the teams can look at other F1 tracks already visited or been to in the past that have been resurfaced, to know some of the characteristics that a newly resurfaced tarmac comes with. It will generally be smoother and soak up more heat owing to its darker colour. The teams can also see if there are any similar corner types for the balance side of things and also similar ambient temperatures to understand cooling demands and requirements.

While a new track requires new track maps to be constructed and populated in the simulators themselves, in terms of the actual running there is no more simulation than on a regular track. The drivers might spend a bit more time in the DIL than usual, in order to get to know the layout and the flow of the corners, but in terms of car configuration, the teams run through the normal sweeps of information.

So, it isn't all that different to how teams approach weekends where they have lots of historical data. Once the cars have hit the track for the first time on Friday, the teams will re-run simulations overnight, sweeping through all the settings to make sure it is operating at the right place.

As for the drivers, first they will need to learn the track, but that usually doesn't take them very long. The main focus is on refining the lines they take in the corners. Because so many of the turns at Paul Ricard are interconnected, there's lots of opportunity to trade time between one and the other. So, finding time in one place but losing a bit somewhere else, and emerging with a quicker time.

This is especially true for the section from Turn 3 to Turn 7, so it's something they can play around with in the simulator to find the right lines and which kerbs they can use. Some specifics of the circuit, however, will only be fully understood when the drivers actually run on track - from individual bumps in the tarmac to particularly aggressive kerbs that might upset the car.

The simulator runs will raise the drivers' awareness of those peculiarities and specific characteristics, where they are going to be and how to tackle them. Track limits will also be interesting from a driver's point of view, because there are no walls, gravel or grass bordering the tarmac in France. It's a very open track with lots of run-off, which might throw up issues on Friday.