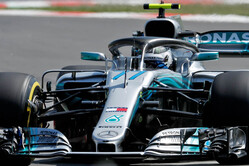 While its rivals introduced their upgraded engines in Canada, the last minute discovery of quality control issues whilst on the dyno at Brixworth meant that Mercedes opted to stick with its old units.

However, ahead of this weekend's French Grand Prix, where the German manufacturer was expecting to finally introduce the upgrade there is talk of it being delayed still further.

With the old units having done the required seven races, Mercedes finds itself in a quandary. Either it sticks with the old engine - which would be its eighth race - and introduce the new unit in Austria or take the risk and introduce the new unit this weekend. On the other hand, should it run a new unit this weekend, but of the old spec, in order to avoid a grid penalty it would need to run the unit for a further six races over the course of the season, presuming the upgrade is introduced soon.

"For sure we need to take some kind of new engine," Valtteri Bottas told reporters at Paul Ricard. "This one is seven races old, and we are very much wanting to run the new one, but this we need to confirm tomorrow if we can or not.

"This season is extremely close between three teams now," he continued, "just a little bit varying between race weekends, but any gain we can get, including a new engine, will be very important if we want to win the title.

"We all hope we can get the new one," he admitted. "At the moment that is our plan but we just need to confirm. We will let you know tomorrow by the end of the day.

"I trust that things are being improved since two weeks ago with the new engine. If we decide to run it, for sure we are confident to run it 100%."

"At the moment, I don't know," admitted teammate Lewis Hamilton when asked what was happening. "I think I might have one of my new engines out of my three, which is good enough.

"The engine that we've used for the first seven races has been a great engine," he added. "But a fresher, newer version of that is going to be great, and have more power than the one I raced in the last race, obviously. And so I personally am not concerned. I think tomorrow or the next couple of days we might have a better understanding of where we stand with that."

"I think as the championship is so close now, every hundredth or tenth is going to be very crucial," added Bottas. "If we want to win the championship then we need to keep getting all the small things. This is a big gain and we really need it."