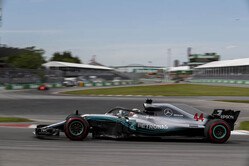 Already handicapped by the fact that quality control issues had prevented Mercedes from running its upgraded engine in Canada, Lewis Hamilton subsequently revealed that he feared an issue with the engine he has used in all seven races thus far was about to cost him his first retirement of the season.

"I'm just so happy that I finished," he told Sky Sports.

"From the start I was down on power and my engine was saying that it was over temperature and I couldn't get them down," he continued. "I thought it was going to fail. Every single lap I was kind of on the edge just waiting for the power to drop away and disappear. It kept dropping and coming back and dropping again. It kept going. It's the seventh race of the engine so it saw its life and I could have lost a lot more points today."

While Sebastian Vettel's win saw the German retake the lead in the championship, Hamilton believes Ferrari's habit of shooting itself in the foot when it really matters will see the Italian team falter.

"There is no reason to lose control," he insisted, "we just keep doing what we're doing, keep our heads down, keep motivated and keep pushing because they will falter.

"We have to keep applying the pressure. We didn't this weekend, but I'm really going to make sure I come back stronger in the next race. Ferrari ultimately have had a slightly better package. All round they've been doing a slightly better job so we've got to do more."

Nonetheless, the Briton became the latest to question the engine rules.

"I hope they don't go to two engines next year as it will get ridiculous," he sighed. "It was definitely a bit more fun when you had more engines. The fact that a season could sway through reliability, I don't think anyone wants to see that. I don't think anyone wants to be cheated of that. You want real, true performance. The sport is going in the wrong direction in my opinion.

"I have so many different opinions about it. They want to change these engines to save costs and then they spend more to produce it."